Alternative TV were one of the few signficant early British punk bands to to eschew the obvious music industry route of signing for a big label - indeed they avoided retricting themselves to the 'punk brand' and took various left turns into more experimental music and free festivals. In this November 1978 interview from the radical magazine The Leveller, Mark Perry of ATV - who also edited the famous punk zine 'Sniffin Glue - expounds on his DIY philosophy with Deptford Fun City records, EMI and class 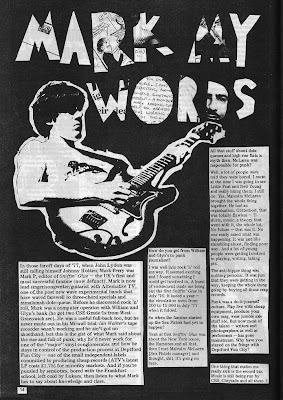 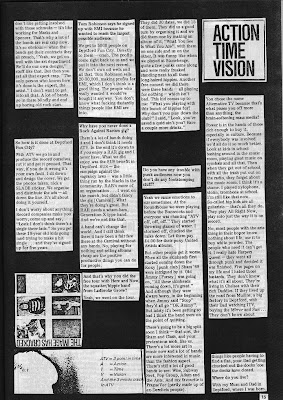 Click on images to enlarge - I haven't transcribed the whole thing, but here's some sections:

How is it done at Deptford Fun City?
With ATV we go in and produce the record ourselves, cut it and get it pressed. That way, it you do it wrong it's all your own fault. I sit down and design the cover. We get the photos taken, nick a SLADE sticker. We organise and distribute the ads - all dwon the line. It's all about doing it yourself.

I don't worry about anything. Record companies make you worry, come up and say, 'Look I don't think there's a single there lads'. So you get these 18 year old kids going mad trying to make a hit single... and they've signed for five years.

Tom Robinson says he signed with EMI because he wanted to reach the largest possible audience.
We get to 5000 people on Deptford Fun City. Directly to them -crash. The profits come right back to us and we put it into the next record. We don't own oil wells and all that. Tom Robinsom sells 20 -30,000, making profits for EMI, which I don't think is a good thing. The people who really wanted it would've bought it anyway. You don't know what dastardly things people like EMI are into.

Why have you never done a Rock Against Racism gig?
There's a lot of bands doing it and I don't think it needs ATV. In the end it's down to if you enjoy a RAR gig and I never have. What we did enjoy was the SUS benefit in Deptford. SUS - the campaign against the vagrancy laws - was a little thing run by the blacks in the community. RAR's more of an organisation ... I went on the march, but didn't fancy the gig [Carnival]. What they're doing's great. But RAR needs a wham-bam, Generation X type band. And we're not like that. A band can't change the world. And I still think there'd have been a fair few there at the Carnival without any bands. No, playing for nothing and selling albums cheap are the positive productive things you can do for people.

And that's why you did the free tour with Here and Now, the squatter/hippie band from Ladbroke Grove?
Yeah, we went on the tour. They did 30 dates, we did 15 of them. They did us a good turn by organising it and we did them one by making an album of it, 'What you see is what you are', with them on one side and us on the other. It was funny like when we played at Stonehenge, quite a few punks came along and were really freaked out standing next to these long-haried hippes. Another free concert we did there were three bands - all playing for nothing -which isn't bad. This kid comes up to me 'What you playing with this bunch of hippies for? Why don't you play down the club?" I said 'Look you've saved a quid aint' you? Have a couple more drinks'.

You chose the name Alternative TV because that's what pisses you off more than anything, the brain-softening mass media?
Power is in the hands of those rich enough to buy it, especially in culture. Because if everybody was involved we'd all do it so much better. Look at kids in school bashing around in the music room, playing great music on cymbals and all that. Then when they get out of school, with all the trash put out on the radio, they forget about the music room. I think it's a shame. I played xylophone, violin, trombone at school. I'm still like that now. So-called hip kids are all guitarists - that's all they do. They play All Right Now, play solo just the way it is on record.

No, most people with the arts thing in their bonce know nothing about life, use it to buy white powder. The people who need it can't get it. I really hate Harpers & Queen - they went all through punk and decided it was finished. Five pages on my life and I hated those bastards. They don't know what it's all about. They're living in Chelsea with their rich Daddies. If they lived up the road from Mullins, a big factory in Deptford, with their Dad watching ITV, buying the Mirror and Sun ... They don't know about things like people having to find a flat, your Dad getting chucked out the docks 'cos the docks have closed.

Where do you live?
With my Mum and Dad in Deptford, where I was born.
Posted by Transpontine at 6:00 am