Lola Montez and the Spider Dance

Lola Montez (1821-1861) lived a short but interesting life. Born Eliza Gilbert in Ireland, she reinvented herself as 'Lola the Spanish Dancer' on the London stage in 1843 before spending time in Paris, Munich, Switzerland, San Francisco, Australia and New York - attracting lovers and scandalous stories along the way. She became particularly known for her Spider Dance, which involved her shaking imaginary tarantulas out of her clothes and stamping on them. It was evidently loosely based on an Italian dance (perhaps linked to tarantism). This short description of her is taken from The Gentle Tamers: Women of the Old West by Dee Brown (1958):

'No western stage performer ever equaled the glamorous Lola Montez in creating an aura of seductive mystery and exquisite scandal around her personality. Whether or not Lola was an actress is debatable - she was more in the class of modern burlesque queens - but the dubious legends of deli­cious sinfulness which she deliberately spread abroad and carefully nourished have spun down through the years until they are a part of the fabric of western history.

With her sensational spider dance, Lola burst upon San Francisco like a bombshell, making excellent copy for the newspapers with stories of her many marriages and her claim that she was the illegitimate daughter of Lord Byron. Offstage she dressed in the Byronic mode, wearing black jackets and wide rolling collars. Bronze-skinned, blue-eyed, she made a striking appearance strolling along the San Francisco streets, with two greyhounds on a leash and an enormous parrot upon her shoulder. She constantly smoked small cigars, forced her way into gambling saloons forbidden to women, and played tenpins with any male daring enough to take her on.

"A tigress," said one newspaper writer, "the very comet of her sex." Lola's celebrated spider dance shocked and titillated her audiences; the spiders were ingenious contraptions made of rubber, cork, and whalebone. She gave a spectacular bene­fit for an audience of San Francisco firemen, and they show­ered the stage with their fancy helmets and almost smothered her with enormous bouquets of flowers'. 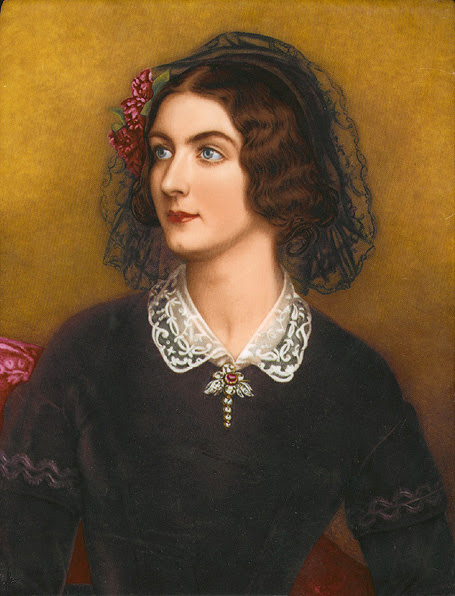 Posted by Transpontine at 5:25 pm

You might enjoy my posts on Tarantism, which also feature Ernesto De Martino's film on the subject.

Very intersting! I was looking for a good article about Lola, thanks!

I was so wondering who Miss Montez was after listening to the song. thanks

Yes, I was interested in Lola after listening to the song by Volbeat too.
What a gal!
You've got to admire her spirit

I learned about Lola while reading George MacDonald Fraser's Royal Flash. His romp with Lola must have been before she contracted syphilis because Harry Flashman died of old age.She must have been something special.