A Night at Rampart

An eclectic night of music at RampART Social Centre in Whitechapel last weekend (Saturday 16th May). I started off in my Half a Person punk-folk-persona playing a few covers with mandolin (including Angelic Upstarts’ Who Killed Liddle Towers, Hefner’s The Day That Thatcher Dies and Crass’s Do they owe us a living) plus a few of my own numbers.

Next up was Double Negative, violin/xylophone/sax (?)/bouzouki combination. Somebody told me to expect Brechtian sea shanties, but I’m not sure that quite captured their sound, they had a pleasing John Cale-like drone going on with the bouzouki/violin combination and they did a stretched version of Ewan McColl’s Dirty Old Town.

Just when you thought it was going to settle into an evening of four course string instruments, up came Femii with an r’n’b PA, including an encore where he got his girlfriend on stage – thought she was going to sing along or dance but actually she just sat down while he sung her a love song.

Then John Eden (Uncarved) had us all dancing to a dancehall set, including that great Heatwave General Levy/Lily Allen mash up (Mad LDN).

Anyway the musical and social mix was all good, like similar squatted projects around the world Rampart -pictured below - sometimes struggles with the contradiction between a language of community inclusion and a reality of tending to be a hang out for a particular sub-cultural scene (typically youngish, white, child-free, activists with ‘alternative lifestyles’). Still at least they have managed to keep something going in the face of serious pressure, particularly a violent raid by taser-wielding police in the aftermath of the G20 protests last month. 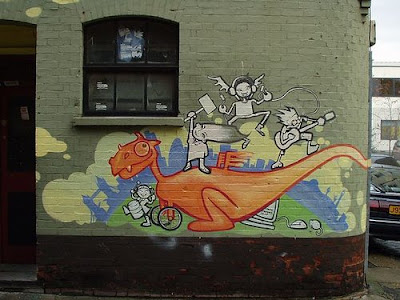 All of this was in aid of the ex-Visteon workers fighting for better redundancy terms having lost their jobs at the car parts factory in Enfield, north London. Along with workers at Visteon factories in Belfast and Basildon they were told with minutes notice that the company had gone bust and that they should go home and expect minimum redundancy payments. At Belfast and Enfield they occupied the factories, while at Basildon they picketed the plant.

Their’s has literally been a Post-Fordist struggle, as the Visteon factories were previously owned and directly managed by Ford. The workers transferred to Visteon had been promised that they would retain their Ford terms and conditions, including redundancy terms that were considerably more generous than the statutory minimum, and this was at the heart of the dispute. In the end Ford has agreed to underwrite an improved offer to the ex-Visteon workers, and the dispute has now ended with them considerably better off than they were at the beginning. So, some kind of victory – though far short of keeping their jobs.

But the Visteon speaker at the Rampart benefit also gave voice to some frustration, since not all workers would benefit equally – the staff being on three separate types of contracts according to when and how they were employed. Whereas in the Ford(ist?) period, huge numbers of workers employed by a single firm could secure common terms and conditions, the break up of such companies into smaller firms has resulted in a fragmentation of conditions, so that even people in the same workplace can be paid differently for the same job - and be paid different amounts if they get made redundant.
Posted by Transpontine at 9:29 am