I enjoyed Jim Shaw's The Whole: a study in Oist Movement exhibition at the Simon Lee gallery in London. The underlying premise of the work was Shaw's self-created doctrine of Oism, a fictional new age religion with dancing rituals: 'Initiated in the late 1990s, it is a fictional religion complete with a pantheon of characters and rituals. Oism is inspired by Mormonism and the Christian Science movement and was allegedly formed in mid 19th Century America by Annie O'Wooten. There is the central idea that time moves backwards and the belief in the supremacy of a female deity, which is often symbolised by the letter “O”'. 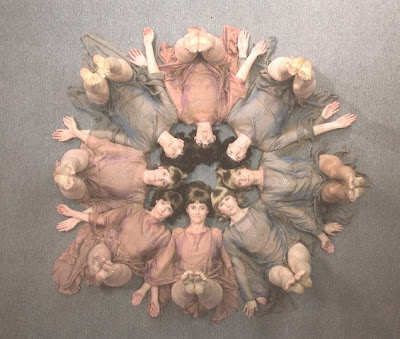 The centrepiece of the exhibition was a film where 'the artist orchestrates a symphony of gestures to create a dream like sequence. Here Shaw merges the extravagancy of Busby Berkeley’s films with the esoteric dances instigated by spiritual leaders such as G.I Gurdjieff'. It was a perfect recreation of how you might imagine such a film from the mid-1970s, a group of women in diaphanous tabards floating around a Banyan tree and lying on the floor doing dance moves as if from a synchronised swimming routine (or indeed a Berkeley movie). The styling was uncanny, with the women dancers embodying a very specific period model of beauty -not just in terms of the haircuts (think Joanna Lumley's Purdey cut) but in terms of being older than the current media/marketing ideal.
Posted by Transpontine at 7:56 am