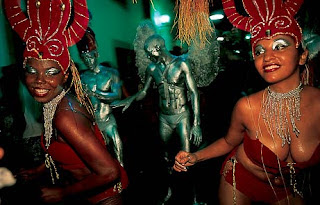 It is Carnival time in Brazil, now a major cultural celebration, but one which people had to struggle to establish:

'By the turn of the [20th] century carnival had become the staging ground for a new battle fought between the proponents of a 'civilized' celebration and the recalcitrantly 'African' blacks. A flurry of police regulations and restrictions sought to limit or eliminate the black influence on carnival. African drum sessions were prohibited. With an eye to keeping black revellers up on the hills, many regulations specified that only 'certain types' of carnival associations could parade down Rio's principal streets... Police would raid sambistas' homes in order to confiscate their guitars' (Alma Guillermoprieto, Samba, London: Cape, 1990).
Today carnival is commercialised and partly contained in the Sambadrome, yet still arguably a festival of liberation:
'Nowhere is the world created by the festival more completely and absolutely opposed to the world of normal daily life, of work, suffering and sadness, than in the parade of the samba schools... without ever losing sight of the often oppressive, exploitative commercialization of the festival, it is still a world in which the experience of oppression and exploitation is swept away in a sense of freedom - a world in which the masses are heatlhy and energetic, well fed and well informed. It is a model of the world as it ought to be, yet as it is only during carnaval... The vision of carnval is clearly utopian - a model of the world as it might be rather than as it is'
(Richard G Parker, Bodies, Pleasures, and Passions: sexual culture in contemporary Brazil, Boston: Beacon Press, 1993)
Posted by Transpontine at 5:32 pm