I want this site to reflect people's personal experiences of dancing and musicking, so I've designed a short questionnaire which I've sent out to various people and which I will post as replies come back in. If you're really keen you can fill one in yourself and send it to me at transpontine@btinternet.com. You can also add another question of your own devising if there's something else you really want to say but can't squeeze into one of these questions! To pilot this I have filled it in for myself, Neil Transpontine.

I remember primary school discos in Luton. It was the 1970s and I won the best dressed boy competition (aged 11) – purple shirt with a big round collar, checked flared trousers, stack heels and a two tone suede bomber jacket (Robert Elms describes these ‘Budgie’ jackets in his book 'The Way we Wore'; Felt wrote a song about them). I remember trying to follow the girls' dancing moves, attempts at ‘The Hustle’ and kind of disco line dances. A few of us decided it was time extend our social lives beyond the confines of our own school, so we went to check out a disco at another local school. Dressed up and looking forward to a dance we were surprized to be set upon almost immediately and chased through the nearby Runfold Estate. Clothes, clubbing and running in the streets at the age of 11 - the pattern was set for the next 30 years.

My mum and dad met dancing at the California Ballroom in Dunstable – I guess that was pretty significant for me even if didn’t happen to me. I met my partner at the other great meeting place – work – but it was defininitely dancing and clubbing that brought us together from a drunken snog dancing to Chic in Upper Street after a Christmas party to several years clubbing all over London in the 1990s. 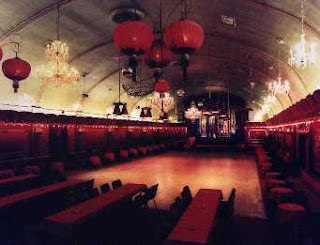 What’s the best place you’ve ever danced in?

Aesthetically, my favourite venue would be the Rivoli Ballroom in Brockley (South London - pictured left), a wonderful old dance hall with velvet walls, chandeliers etc. In terms of the thrill of being there, I would say the M41 during the Reclaim the Streets party which closed down the motorway for a day in July 1996 - London Acid City – Our Time was Then.

Hard to pin down one, but I suppose going to Club UK (in Wandsworth) with my new girlfriend (now wife) for the first time in 1994 would be up there. I can remember lots of details of the night – listening to a pirate station on the way out, J’s clothes, talking in the queue to some kids who’d done a bunk from the local children’s home to come out. Most of all I remember walking in and they were playing that Pigbag remix (Perfecto Allstarz – Reach Up), the whole place seemed to be exploding, everyone was dancing including the bar staff. Chemicals were obviously adding to the effect for me and most of them, but I also felt this sense both of instant community and continuity, as I’d seen Pigbag play this track live years before and had also seen and loved The Pop Group (Bristol post-punk agit-funkers) from whom Pigbag emerged.

Nothing terrible has happened to me personally, but in the early 1990s I helped put on a party at the 121 Centre in Brixton. There was a basement with a wooden staircase down to it. A guy fell straight from the top to the bottom, people carried him up (probably not the best thing to do in terms of first aid) but he died on the pavement outside – whether from the fall or that combined with drugs and alcohol I’m not sure. 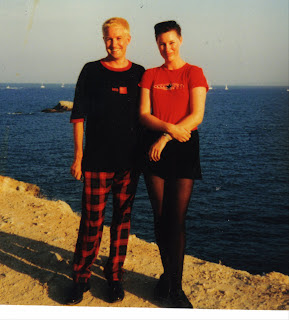 After school and youth club discos I started out with post-punk gigs, getting my glasses smashed in the mosh pit at The Undertones (Aylesbury Friars), leaping over the barriers at the Albert Hall to get to the front when Echo & The Bunnymen played there (1983). Then on to anarcho-punk squat gigs, mid-1980s (Old Kent Road Ambulance Station, Kings Cross Bus Garage), rare groove/funk nights 1987/88 (Jay Strongman’s Dance Exchange at The Fridge in Brixton, PSV in Manchester), ‘world music’ clubs (Mambo Inn in Brixton, Whirl-Y-Gig in Shoreditch Town Hall), indie pop nights in the late 80/early 90s (Camden Falcon, New Cross Venue), clubs in West Belfast (Felons). Everywhere possible with increasing frequency in the 1990s from house music clubs (Club UK, Ministry of Sound, Leisure Lounge, The Gallery at Turnmills, The Cross, The Aquarium), trance and techno nights (Megatripolis at Heaven, Eurobeat 2000), drum and bass (Speed at the Mars Bar) to free parties/squats (Cool Tan and Dead by Dawn in Brixton, bus garage in Hackney, United Systems parties in Market Road, north London). The photo right is in Ibiza (where else?), 1995. Finally stopped for a breather due to children later in the 1990s, sporadic and eclectic dancing, DJing and musicking ever since, highlights in the last year including Norman Jay at Notting Hill Carnival and rediscovering dancing to indie pop at How Does It Feel to be Loved? in Brixton.

Sean Rowley's Guilty Pleasures at Everything Must Go in Soho, just before Christmas 2006. It was most people’s last day at work for a week or two, so it was like the Saturday night release feeling magnified in intensity, hundreds of people singing along to Carly Simon (‘I had some dreams there were clouds in my coffee…’) dancing on tables and in every available space. I started having this utopian fantasy about everyone deciding that they wanted to carry on like this all the time and refusing to go back to work after the break - a kind of disco general strike spreading across the planet.

You’re on your death bed. What piece of music would make your leap up for one final dance?

Probably some epic house anthem, Scarlet Beautiful by The Beloved would certainly be up there as the song we played at our wedding. Your Loving Arms by Billy Ray Martin. Something like Joe Smooth ‘Promised Land’ or Bedrock’s 'For what you dream of' would also work. Or maybe ‘Walk away Renee’ (Four Tops). Or Belle and Sebastian’s ‘Boy with the Arab Strap’. Or…. Or….
Posted by Transpontine at 8:33 pm