A global economic crisis is leading to global austerity - yet paradoxically in places at the sharp end populist nationalism is resurgent amidst the demonstrations and riots. A recent survey of the situation in Greece notes that 'Nationalism (mostly in a populist form) is dominant, favoured both by the various extreme right wing cliques as well as by left parties and leftists. Even for a lot of proletarians or petty-bourgeois hit by the crisis who are not affiliated with political parties, national identity appears as a last imaginary refuge when everything else is rapidly crumbling. Behind the slogans against the “foreign, sell out government” or for the “Salvation of the country”, “National sovereignty” and a “New Constitution” lies a deep feeling of fear and alienation to which the “national community” appears as a magical unifying solution. Class interests are often expressed in nationalist and racist terms producing a confused and explosive political cocktail'.

Look too at Egypt where the army seized power by posing as the guardian of the nation in the revolutionary upheaval there; or at Libya where 'foreign national' migrant workers have suffered abuse and worse as potential 'mercenaries' during the revolt. Adrift on the ocean of debt and recession the ship of the nation state seems to be a place of safety even as it sinks... the dream of returning back to an imaginary time when our lives weren't at the mercy of abstract, impersonal forces.

There are a number of ways to respond to this. One is to go with the flow and try to put a postive spin on it, to imagine a kind of politically correct patriotism - see for instance Billy Bragg's advocacy of a 'Progressive Patriot' position [insert standard Orwell quote about patriotism being good, but nationalism being bad, whatever the difference is]. But loving the place you happen to know is no basis for any kind of politics - that doesn't make it any better than all the places you don't happen to know.

Another approach is an abstract internationalism which simply affirms a global solidarity without getting hands dirty criticising the prevalent nationalism of where you live. In Berlin earlier this year, on the other hand, I was struck by the continuing virulence of the anti-national position: a total refusal to have any truck with celebrating Germany or German culture. Here's some images from that current: 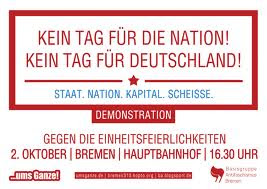 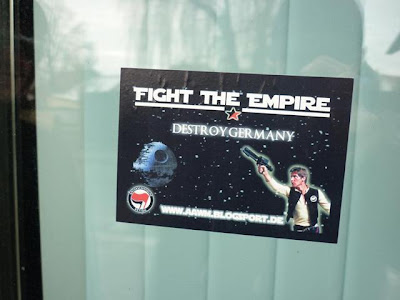 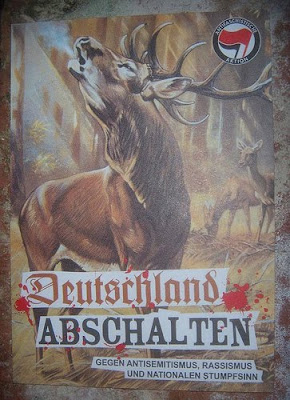 'Everybody loves Germany. We don't' 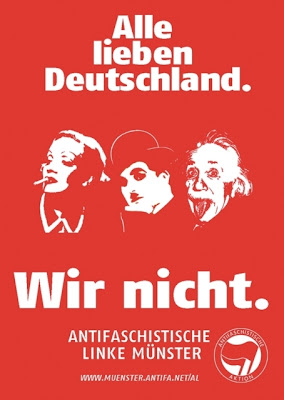 There are some problems with parts of the 'anti-national' tendency, especially when German exceptionalism is over-emphasised. The point isn't to be just 'anti-German' as if other people's nationalism is OK - and indeed in Germany many people in that current moved on from describing themselves as 'antideutsch' to 'antinational'.

What would an 'anti-British' imagery look like? What is it we would be against - the nation state? The political formation? The notion of supremacy of British culture and history? Would it be worthwhile? Just thinking aloud here, but if you want to have a go at some stickers let's see what you come up with!
.

Love the song as well as the post. I'd not heard that one before.