Next up on the Dancing Questionnaire, is Smith3000 of Expletive Undeleted blog and much more besides - 'did fanzines as a kid, promoted bands like the Membranes and Bogshed in Scunthorpe, first DJed in Darlington in 1984, moved to Leeds, was a founder member of techno collective Microdot, DJed on Leeds pirate Dream FM for five years, freelanced for NME, Mixmag and iD, started after-hours Ministry of Shite parties, moved to Manchester. Now write a blog and occassionally DJ at our 'early doors easy listening and bossa nova' do Easy Tiger with the lovely Jeanie'. 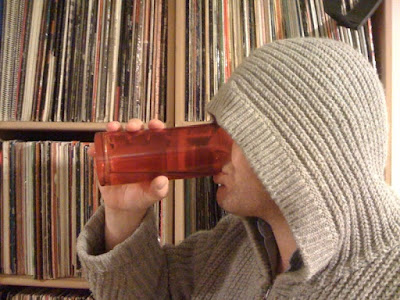 1. Can you remember your first experience of dancing?
My parents used to buy a bit of chart music and I remember us all doing some awful synchronised hands-on-hips dance to Mud’s Tiger Feet in the front room, over and over and over again. Wikipedia tells me this would have been 1974, so I will have been nine. I got a rush.
2. What's the most interesting/significant thing that has happened to you while out dancing?
I met my girlfriend when I was DJing early doors in a bar in Manchester a few years ago and persuaded her to stay out later than she planned so we could go to a club where a mate was playing. It was on the dancefloor there that I began to really understand exactly how fantastic she was. We’re still together.
3. You. Dancing. The best of times…
A lot of is to do with women and drink and drugs. If I’m dancing, I’m probably in a pretty contented state of mind anyway. But I have two happy moments that immediately spring to mind: Glastonbury’s experimental music field, sometime in the early 90s. Underworld played through Pink Floyd’s quadraphonic soundsystem for like 12 hours or something and me and my then girlfriend were tripping and dancing and acting daft pretty much the whole time.
One new year’s eve at the Band on the Wall in Manchester, at a gig by A Certain Ratio and Fila Brazillia, drunk but completely synchronised with an equally drunk then girlfriend. We tripped the light fantastic. It felt like a scene from a musical. And I also have very happy memories of making shapes at a birthday party for Bob Marley in Jamaica, at Bora Bora on the Playa den Bossa in Ibiza, on a podium at la Terrazza in Barcelona, the Mardi Gras in Kings Cross in Sydney and at Robodisco at Planet K in Manchester. When it got to 6am and the light started to come in through the glass roof during Back to Basics residency at the Pleasure Rooms always felt very special. Maybe it was just the drugs. And the night that I met my lady, of course. I could go on all night here. 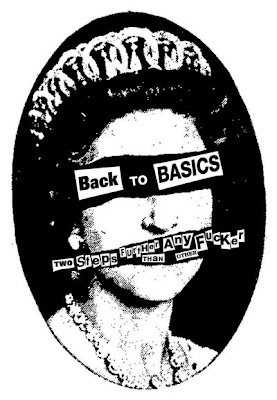 Back to Basics, Leeds - detourning Jamie Reid's God Save the Queen détournement
4. You. Dancing. The worst of times...
I had a bit of a funny turn at the Big Chill a few years ago where I inadvertently did too much MDMA and got some intense visual hallucinations (every surface of everything had like a layer of cling film hovering about a centimetre above it) which was kind of okay - but eventually I became utterly disorientated and incoherent and would have been up shit creek if I’d not had a mate with me. I also ending up puking so hard I did something to my diaphragm (which hurt for weeks afterwards). I had to go for a lie down.

5. Can you give a quick tour of the different dancing scenes/times/places you've frequented?
I always used to dance at punk and indie gigs but as far as clubbing goes, I went to places like the Limit and the Top Rank in Sheffield, Spiders in Hull and the Ad-Lib in Nottingham.The club where I was first a regular was the Baths Hall in Scunthorpe in the early Eighties, where they stuck a dancefloor over the pool in winter and Steve Bird used to play punk, indie, alternative stuff and a little bit of reggae. Big tunes (for me at least) were stuff like Puppet Life by Punilux, Where Were You by the Mekons, Walls of Jericho and Nag Nag Nag by the Cabs, Follow The Leaders by Killing Joke and anything by the Stranglers. It was fucking brilliant. John Peel always used to say that the Baths was his favourite gig. We believed him.

I lived in Leeds during the late Eighties / Nineties and haunted places like the Well Funked Society at the Phono, Dig at the Gallery, Joy at the Warehouse, Kaos at Ricky’s, the Dream all-nighters at the Trades in Leeds, Back to Basics at the Music Factory, and Hard Times in Huddersfield, plus odd dances at the West Indian Centre and blues like Les’s and 45s in Chapletown.

In Manchester, Mr Scruff’s Keep it Unreal things is always good, as was the Robodisco and Electrik Chair and anything that Chris Jam or Rob Bright are DJing at.

6. When and where did you last dance?
When Weatherall did the one-deck wonder thing at Electrik bar the other week.

7. You're on your death bed. What piece of music would make your leap up for one final dance?
If I’ve got the energy, Le Freak by Chic. If not, Sweet Love by Anita Baker for one last erection section, propped up by my long-suffering missus.

All questionnaires welcome - just answer the same questions in as much or as little detail as you like and send to transpontine@btinternet.com (see previous questionnaires).