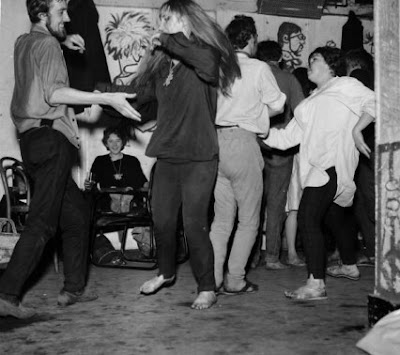 The excellent Another Nickel in the Machine - a site focusing on 20th century London -has recently featured some great photos of A Rave on Eel Pie Island in August 1960. I have reproduced a few here, check out the original post for more. 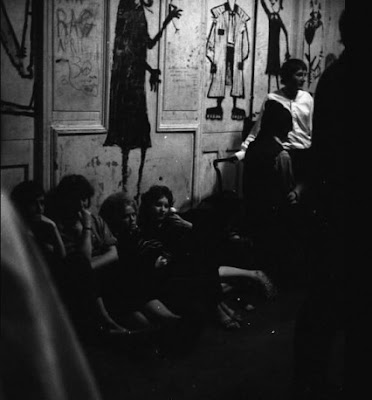 This was obviously a beatnik affair, complete with barefoot dancing - the music probably trad jazz, the preferred soundtrack for Britain's first generation of self-proclaimed ravers. A contemporary article reports 'The tolerant atmosphere in places like the Eel Pie Island club, off Twickenham, is at first surprising: up to 500 people will gather in the hall of a the derelict island hotel and, despite their often outlandish appearance, will listen and jive together all evening without incident' (Traditional Jazz is Booming, The Time, 12 August 1961). The scene doesn't look unlike a squat party rave of the last 20 years - graffiti on the wall, androgynous baggy clothes etc. 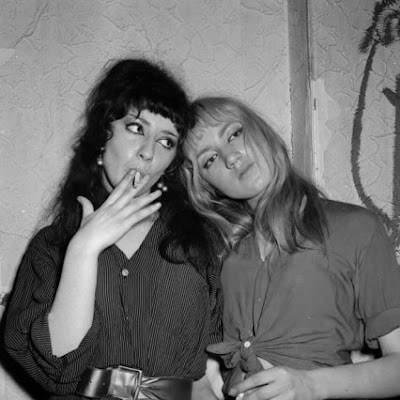 Eel Pie Island is located in the River Thames at Twickenham in South West London, and is a key location in London counter-cultural history, particularly the Eel Pie Hotel and its dancehall. Before the Second World War it was popular for ballroom dancing, then in the 1950s hosted jazz raves (like the one pictured here), before becoming a launchpad for English R&B, with bands like The Rolling Stones and John Mayall's Bluesbreakers playing there.

A 1967 article describes Eel Pie Island as 'for the past 10 years a Mecca of the long-haired ban-the-bombers.. On three evenings a week, the humped footbridge linking the island with the mainland supports a bedraggled procession of young people who trek from all over the country to spend a few hours a the island's famous jazz club. The throbbing, smoky atmosphere of the big hall where they dance, and the jungle of rough grass and bushes leading to the edge of the Thames forms a wild haven for non-conformists'.

The article goes on to disclose 'The Secret of Eel Pie Island' - that the club is partially a 'beatnik experiment', an 'open therapeutic community' run by Arthur Chisnall, a sociologist 'as an experiment in reaching and helping disturbed youngsters in their search for a purpose in life...Beatniks and delinquents who have drifted to the island over the years have since found their way to colleges, universities and into the social service' (Times, 6 January 1967)

The hotel closed in 1967, but the club reopened for a while in 1969 as Colonel Barefoot's Rock Garden, featuring underground acts like Hawkwind and The Edgar Broughton Band. The place was then occupied for a nominal rent by the Eel Pie Commune (1969-71) - there is an interesting article by the anarchist illustrator and Commune founder Clifford Harper here describing those two years of drugs, hippiedom and political arguments: 'It had 25 bedrooms and at one point 100 people from all over the world were at Eel Pie Island. It was anarchy... It had a big lawn and some grounds and the hotel was full of people... Part of the hotel we opened as a dance hall on Friday and Saturday night. Out in the suburbs, six to seven hundred kids would turn up'.

In his memoir, Eel Pie Dharma, Chris Faiers remembers: 'The old hotel rapidly filled with dossers, hippies, runaway schoolkids, drug dealers, petty thieves, heroin addicts, artists, poets, bikers, American hippie tourists, au pair girls, and Zen philosophers from all over the world... The derelict Eel Pie ballroom was opened for business once again. It looked like a high school gym done over by hippies. There were garish psychedelic paintings all over the flaking walls. The most striking was the looming head of a red-eyed hippie king, with his Aubrey Beardsley tresses winding about the walls'.

Some great parties I am sure, but not a libertarian utopia - as usual where drugs and money are involved, some very dodgy characters were drawn to the honeypot. Another participant recalls that 'the only guns seen were those produced 18 months later by some East End gangsters, brought in to ensure the dance-hall's peaceful transition of authority from the patronage of a nearby Hells Angels chapter to that of a slightly more professional management'.

The Hotel was burned down in 1971 in the midst of a controversy about Richmond Council issuing a demolition order for the building to pave the way for a contentious redevelopment of the site.

A new book on Eel Pie Island by Dan Van der Vat & Michele Whitby is due to be published in October 2009.

Posted by Transpontine at 8:05 am

Those photos are class. There's something inherently exciting about old photos of people having funky fun. Espesh beatniks!

If I had thought on I would have insisted they all participate in the inaugural Communism Is The Movement Before Our Eyes Triannual Dance Event!

I suppose there's always the next 2 ;o)

OHH just found this. Great! I went there once to see the Rolling Stones when I was about 14. It was sold out and I didn't get in.
The later in the mid to late Seventies I went there a lot as the hotel was squatted by a full on commune of anarchists. Clifford Harper lived there during that period.

I remember going regularly to Coll Barefoots it was great.