Marching against megadeath - June 22 1980 in London

The announcement of the deployment of a new generation of US nuclear weapons in Europe, coupled with increasing tension between NATO and the Soviet Union, led to a mass peace movement across the West in the early 1980s. In England the first major demonstration against these cruise missiles was called by the Labour Party on June 22 1980.

Around 25,000 people marched in the pouring rain from London's South Bank to Hyde Park.  Speakers included veteran peace campaigner Fenner Brockway,  soon to be Labour leader Michael Foot and the actor Susannah York who told the crowd,  'I refused to accept that 25,000 people here today are one fortieth of a megadeath. I am not a millionth of a megadeath. We are ourselves'. 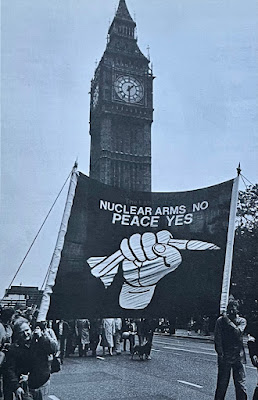 The image of the megadeath and mass nuclear destruction haunted the nightmares of young people like myself getting involved in this new peace movement and recurs across popular culture in this period. In its report of the demo, Socialist Challenge noted that 'One of the most striking features of the demonstration was the high proportion of young people who turned out. Groups of friends carried home-made placards calling for an end to war: "Fall in against fallout", "Education not Missiles", "Wage War on Weapons", "Germ Warfare means Nightmare". 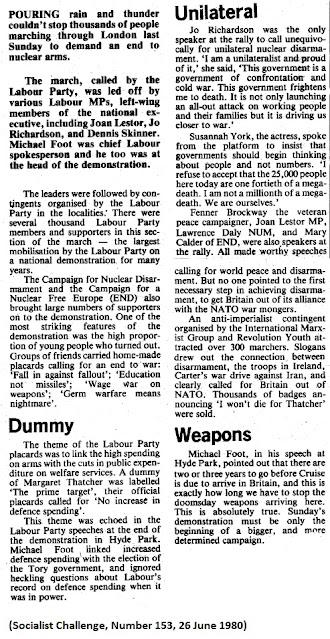 This is part of an ongoing series on the 1980s peace movement. See also:
The first march against nuclear missiles at Greenham Common,  September 1980
CND Reborn - the Protest and Survive demonstration in London, October 1980
[I am not a particular fan of Socialist Challenge/International Marxist Group but the online archive of this paper is a good source of news on social movements in the period. If you come across other reports of this demo let me know]
Posted by Transpontine at 6/22/2022 09:21:00 am