Terrible to hear of the murder of Dom Phillips and Bruno Pereira in Brazil - not just an isolated act of violence but a moment in a brutal war against those trying to protect the Amazon and those living in it, encouraged by president Bolsonaro and enabled by his global far right backers.

All a long way from the 1990s when Dom made his name as editor of Mixmag magazine, the biggest and most popular of the dance music magazines of that time with a circulation reaching up to 80,000 a month. It might not have always been the coolest, steering as it did towards the mainstream of UK clubbing, documenting and itself accelerating the growth of mega club brands and big name DJs. This was a phenomenon Phillips himself was to write about in his 2009 book 'Superstar DJs Here We Go!':  'From 1992, when acid house moved into legal venues, until 2000, this was the era of superstar DJs and superclubs. A generation gleefully lost itself in a maelstrom of disco euphoria and house music and clubbing became the defining sound and lifestyle of 1990s Britain'.

Mixmag featured interviews with DJs, musicans and producers, but Dom Phillips clearly realised that it was the clubbing experience itself that was central and the diverse clubbers who were the real stars. The mid-1990s 'were the golden years of 1990s clubbing, when you could meet anyone and be anyone, when the most unlikely networks of people were formed, criss-crossing the country. Club after club sprouted up in drab northern and Midland cities, little blooms of colour and life. Being a clubber felt special. It was about belonging. And for many clubbers, that sense of identity was a huge part of the lifestyle... Clubbing felt like a big, happy party that went on and on' (note by this time people tended to identify as clubbers, hardly anybody was calling themselves a raver).

Those buying the magazine wanted to have their amazing nights out reflected back at them and to see people like themselves dressed up, dancing and ecstatically happy.  And this is what Mixmag offered, as in these examples from one issue (September 1997). A piece 'What are you proud of? captures people at the Pride festival on Clapham Common, as well as 'Goodbye Cruel World' in Leicester, Equinox in Wilmslow, The Leadmill in Sheffield and a Reclaim the Streets party in Nottingham. 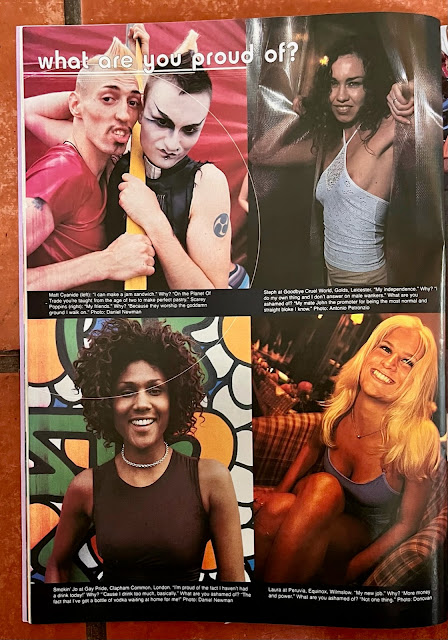 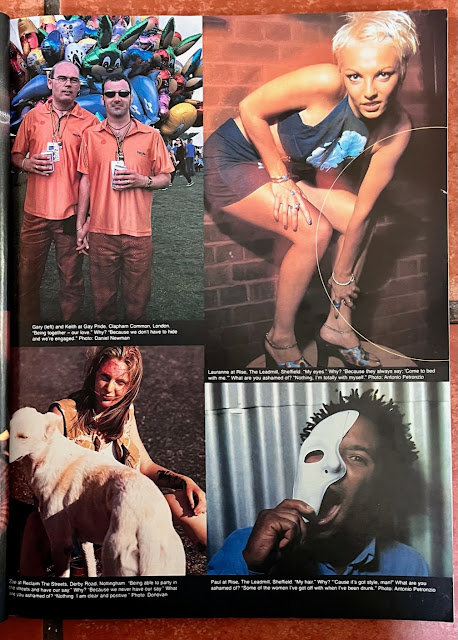 Another article was based around the premise of photographing/interviewing people boarding a flight to Ibiza and then doing the same a week later when they returned. We see 'speed garage queens' Leanne and Michelle from Bexleyheath heading off for a 'club marathon' 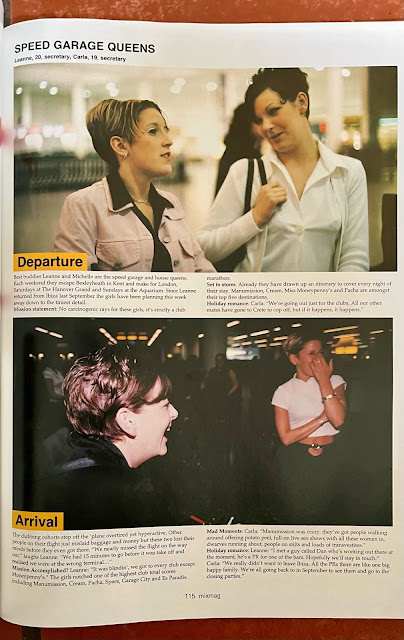 All of this reflected Phillips' mission for Mixmag: 'Clubland was a broad church and I wanted all these different voices, clamouring at the tops of their voices, tumbling out of the pages of the magazine'. Around this time even I had a column in the magazine (Back in the Day) for a little while where I managed to squeeze in snippets of radical history such as the Stonewall riots and the origins of Notting Hill carnival.
[click on images to enlarge]
Posted by Transpontine at 6/19/2022 11:03:00 am