'9 August 1980. Ninth anniversary of internment, and the Au Pairs are playing a free gig for the kids in West Belfast. Rock The Block - it's in support of the women in Armagh and the men on the blanket in H-Block. The band deliver a tight set, mostly songs written by singer Woods about sexual politics, roles and relationships. The audience are stunned by Lesley; they've never seen anyone like her.' (Kate Webb, in The Book of the Year, Ink Links, 1980)

The Au Pairs were one of the most interesting of UK post-punk bands, exploring subject matter rarely if ever explicitly addressed in music from the sexual politics of relationships to the abuse of Irish women prisoners (the subject of their song Armagh). Their politics was a thread through everything they did, from their guitar playing to their choice of benefit gigs. They played for Rock Against Racism (indeed were started out by people involved in Birmingham RAR), Rock Against Sexism and various other causes.

This interview is from the radical left magazine 'The Leveller' (August  7-20 1981). True to style it took place at a No Nukes Music gig the band were playing at Lambeth Town Hall in Brixton (just round the corner from The Leveller's office at 52 Acre Lane SW2). 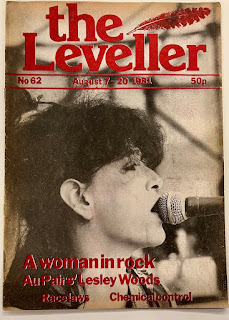 'I don't think you can have any political awareness, though, without being aware of the way women are exploited in this society; it's a patriarchal society and women are oppressed. People are so paranoid about being told that, but it just happens to be a fact, not a point of view, a fact, and an inevitable result of the way society is organised right down to the basics. Capitalist society relies on the family, and women exist for the family and for producing children. In our society anybody who's involved in production gets exploited... I just read that today! Brecht's The Mother. It's really good. I get fed up always having to apologise or to defend the argument that women are oppressed. It is a fucking fact; not my point of view, or the left's point of view. I don't know what the solution is. I don't see a solution. But I could say that if every woman in the world decided to stop fucking with men and just became separatist then you'd be forcing the issue!'

'it's not about women making it in a man's world - like Cosmopolitan is always saying that in order to be a liberated woman, to be emancipated, you've got to climb the ladder to the top. It's not about men who've set standards for success that women must follow; it's not about women having to achieve those standards in order to be thought of as successful in our society.  Women don't need to be the boss of a big firm; that's not the requirement for their liberation that's just following the traditions that men have established. It's more important that women get together - they're constantly set against each other, made to feel very threatened by other women. I don't mean, you know - all us wonderful sisters, unite and fight. But we have to find our own standards.
It really upsets me when I see a women's band who get up and play a gig, and I see them playing their guitars in a way well, you know how to play a guitar; that's all been set down by men. Who's to say that to play a guitar, though, you've got to do it like Jeff Beck? And they might get self-conscious about male macho rock guitar styles, so they play really nice twiddley bits, or nice bits of lead around minor chords which is fair enough, but it just upsets me in a way because I just think we've got to find other ways; women have to start developing new styles. I only know from my own experience that I can't play anything like that on guitar; I don't know how to play a lead break, but as far as I'm concerned what I play on my guitar is good, and who's to say I'm not a good guitar player... I think I'm fucking brilliant!' 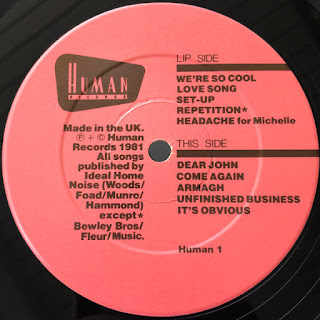 I was lucky to see the band a couple of times, once at Kent University in 1981 and at the legendary Beat the Blues festival at London's Alexandra Palace in 1980. The latter saw some of the best post-punk bands  (Slits, Pop Group, Raincoats, Au Pairs, Essential Logic plus punk poet John Cooper Clarke) play to mark the 50th anniversary of the Communist Party's Morning Star newspaper.  I found this picture of the band playing there on flickr from Alan Denney): 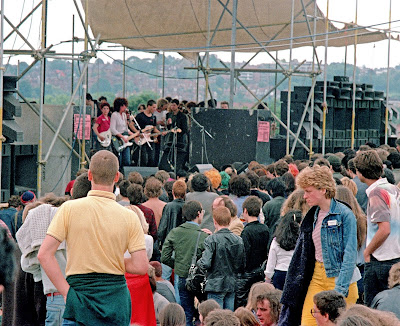