The murky story of American “psychological operations” in the Vietnam war features many strange episodes. As told in ‘If Then: How One Data Company Invented the Future’ by Jill Lepore ((2020) this included the largely unsuccessful efforts of a private company contractor, The Simulmatics Corporation.

Set up in 1959, the company pioneered the use of computers for market research and predictive modelling. As early as 1960 they had begun developing what they termed the People Machine ‘a computer program designed to predict and manipulate human behavior, all sorts of human behavior, from buying a dishwasher to countering an insurgency to casting a vote’.

At their suggestion the Pentagon established the Hamlet Evaluation System in 1966, a massive bank of computerized data [...] compiled, updated, and analyzed, day by day, on 12,500 strategic hamlets in forty-four provinces’ in Vietnam, supported by more than 300 staff.

In Vietnam one of Simulmatics' operatives was Joseph Hoc, a locally born Catholic priest. His plans included ‘something called the Sorcerers Project, he explained, because "Vietnamese villagers believe in prophecy and the power of holy men to foretell the future." For this project he intended to circulate false magic, the way another sort of psychological warrior might circulate, for instance, fake news. Alas, "the sorcerers did not say what they were supposed to say."

Linked to this, his 'Prophesy Project' saw thousands of booklets being distributed with a prophesy that "the Viet Cong will be defeated in 1969". Unfortunately for him, very few believed it.

Another initiative, the Folksinger Project, 'involved composing new folk songs intended to "inject dislike and hatred of the V[iet] C[ong]." But North Vietnamese attacks immobilized all of Ho's folksingers'.

As uprisings spread through the United States in 1967 the company turned its efforts to riot research and prediction, using computers and questionnaires. As Lepore observes 'Simulmatics' work on riot prediction in American cities bore an eerie similarity to McNamara's giant computer program, the Hamlet Evaluation Study, which, after all, aimed to predict insurgency. In the United States, Simulmatics attempted to determine the "Mood and Atmosphere Within Riot Community" and to assign it a number ("1-Calm restrained; 2-Tense; 3-Angry; 4-Fearful,nervous; 5-Apathetic; 6-Euphoric, Carnival; 7-Friendly, good-willed; 8-Chaotic; 9-Orderly; 10-Other")'

The company was targeted by anti-Vietnam war protesters including Students for a Democratic Society at Massachusetts Institute of Technology, which had links to the company. Simulmatics was declared bankrupt in 1970. Lepore suggests that one reason was that it’s ideas were ahead of what the technology could actually deliver in the 1960s but that its vision has subsequently been realised by corporations like Facebook, Google, Amazon and Cambridge Analytica. 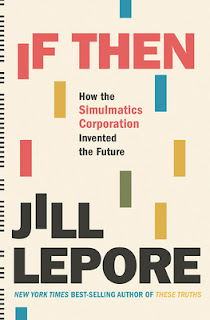