'Living London: its work and its play, its humour and its pathos, its sights and its scenes,' edited by George Robert Sims, is a remarkable attempt to give an overview of London life at the turn of the 20th century (it was first published in 1901). All the volumes can be browsed on archive.org, and provide a great resource for historians of this period.

There are a number of chapters dealing with London nightlife. One on 'Midnight London' (in this volume) by Beckles Wilson concludes:

'Such, then, is Midnight London. In all the world's capitals is dissipation found under the name of pleasure; Britain's Metropolis is no exception. The gaudy and glittering throngs swarm over the pavements; and to the midnight sightseer there is a novelty in the spectacle of brilliant toilettes and ravishing complexions now visible at the tables of the brilliantly-lighted salons, which are crowded to the doors by Pleasure's laughing votaries. To such as these mid-day London has no attractions — is dull, tame, stupid. It is not until the mighty electric flare which distinguishes modern London bursts upon the city that they feel, with Edgar Allan Poe, that " the sun mars the ecstasy of the soul "; their pulse beats quicker by gas-light, if they do not hold that "Life is diviner in the dark." London in the twentieth century, however, is never dark, and the interval seems to be growing shorter and shorter  when it is ever quiet'.

The chapter on Dancing London by C. O'Conor Eccles (in this volume) surveys social dancing from
Mayfair Balls to poor children dancing in the streets. There are Highland Gatherings, Irish dances organised by the Gaelic League and a fancy dress ball at the German Gymnasium in Pancras Road. Here's a few extracts:

'When gaslights twinkle like stars, and  arc lamps shine out like moons, Dancing London bestirs itself. Dancing London!  What a vision the words call up of life, of movement, of riotous hilarity. Dancing London, of course, is young; is largely, though not exclusively, female; and is of all classes, from the fashionable debutante revolving to the strains of the Blue Hungarian Band to the coster girl footing it merrily on the pavement to the mechanical beat of a piano-organ. Men in general share in the amusement with less enthusiasm — under protest, as it were, and as a concession to the wishes of their womenkind — though amongst them devotees of the dance are to be found...

Dancing, as already indicated, is by no means confined to one class, or any degree of wealth. Indeed, it is generally found that the less this enjoyment costs the more heart-whole and satisfying it is. Quite as much pleasure can be purchased by a modest expenditure as by the most extravagant outlay. If we desire to see dancing less hampered by financial considerations than that hitherto noted, let us take a bird's eye view of Holborn Town Hall any evening, during the winter months, when the popular Cinderella dances are in progress. Despite a good floor and good music the price of admission is low. The entertainment of the season is the fancy dress ball, to which men are expected to come in cycling, boating, or other costume associated with some athletic sport, while the girls wear any pretty, light dresses at their disposal. Conventional evening garb alone is conspicuous by its absence... 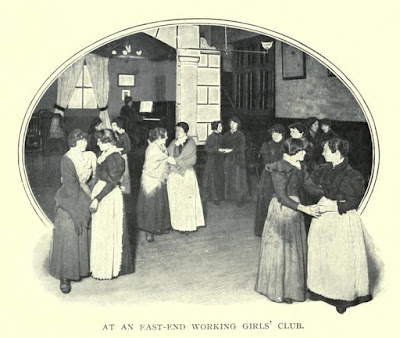 English girls are exceedingly fond of dancing as a recreation. If anyone doubts it, let him visit the girls' clubs in Stepney, or Hoxton, or the Mile End Road. After a long day's labour in a mineral water factory (whose employees are sometimes distinguishable by their bound-up hands, or faces scarred by bursting bottles), in a match factory, a jam factory, or a tailor's shop, they will start to their feet at the first sound of the piano, and circle with an activity fairly surprising. They dance with each other, and seem to desire no other partners. Typical East-Enders are these lasses, with a shock of dark hair combed forward and forming an arch from ear to ear. Their dresses are bright blue or purple for choice, but often the original colour is only to be guessed at...

...there  are penny dances in rooms at the back of public-houses, where the coster and his "pals" male and female disport themselves. There are also dances " free, gratis, and for nothing," when weather permits, in any asphalted side street with a convenient public-house at the corner where refreshment may be obtained in the pauses. The girls are the first to start. Their "young men" lounge around and guffaw until they are pulled or pushed into the circle and compelled to take their share, which they do after a fashion more uncouth than the girls, some of whom waltz admirably. A Bank Holiday on Hampstead Heath affords, too, an excellent view of this side of Dancing London. Here many such groups may be seen, groups beguiled from the fascinations of "kiss in the ring" by the superior charms of rhythmic revolution. And thus goes it through all classes, from lords and ladies to costers and their "donahs".'
Posted by Transpontine at 7:30 pm

This is making me think again of the absolute horseshit of that line spun by Anthony H. Wilson / Factory etc etc about how "it took Ecstasy to make the white man dance". Which was a daft assertion because half the deejays at the Hac had been involved in Northern Soul, but this just proves there's never not been a dance culture in the UK. Mods, trad jazz, the swing bands, the flappers... but as your fascinating extracts shows, even before jazz arrived, there was nightlife and dances of all kinds at every level of society.