NME Charts December 1983: the best of times and the worst of times?

What were the UK pop kids, dancers and punks listening to 30 years ago? Here's some clues in the charts  from the New Musical Express 24 December 1983.

The Dance Floor charts weren't really a reflection of record sales or even necessarily of what people were dancing to in many UK high street clubs. This one was compiled by the DJ at Birmingham club 'The Garage' so it's probably more a snapshot of what people were listening to there and in similar places where the DJs played an eclectic mix of of  funk, soul and more post-punk funk from the likes of A Certain Ratio and Jah Wobble. Certainly I remember going to lots of student parties in this period where James Brown was obligatory - he was still releasing great records in this period, with 'Bring it On' coming out in 1983 and his last hit 'Living in America' in 1985. 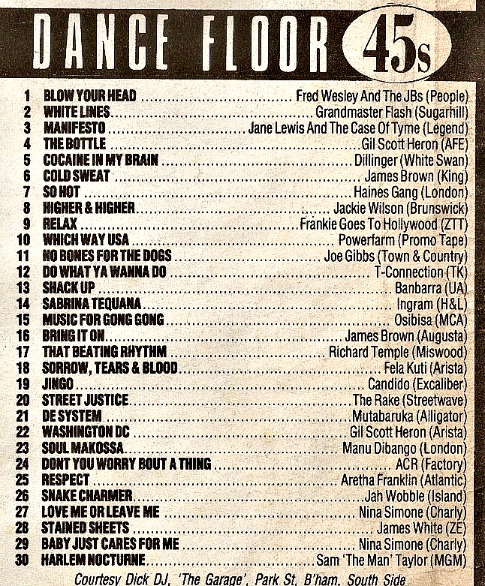 The term 'World Music' hadn't yet caught on, the category 'Third World' was used in the NME charts to cover music from Africa, the Middle East, Mongolia and seemingly anywhere outside of Europe and North America. The chart was compiled by Triple Earth Records, which went on to become a significant 'world music' label in the 1980s.

The Reggae Disco singles charts and Reggae LPs chart were compiled by 'Observer Station' with a whole lot of Johnny Osbourne - three singles and an album riding high. Michael Palmer's Ghetto Dance was number one single ('Ghetto dance, ghetto dance, Babylon give me a chance...'). 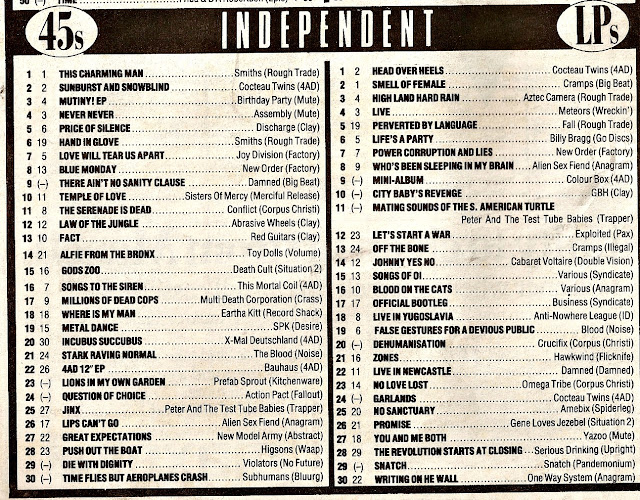 The main UK charts featured some classic pop as well as lots of crap which no amount of nostalgia/retro irony can rescue from the charity shop unwanted piles where it now lingers. The dominant album was Michael Jackson's Thriller - number one in the charts a year after it was first released. Culture Club has become a global sensation that year, and Luton's Paul Young was riding high. I worked in a Luton factory that summer packing electrical instruments while listening to Radio One with his then girlfriend's mum! 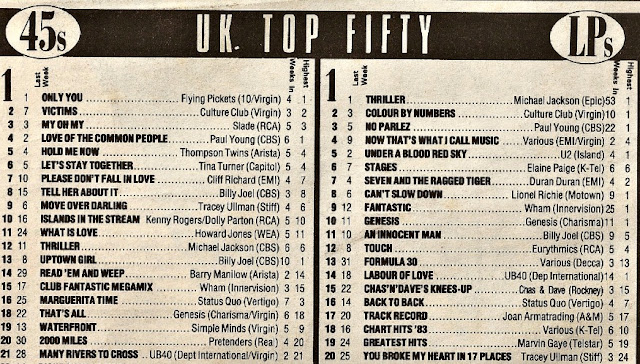 Posted by Transpontine at 8:50 pm

Thank you - a brilliant memory-jogger for me. I started my first full-time permanent job in December 1983 - in an independent record shop. We had to play mainstream chart stuff on Saturdays so it was all Paul Young and Lionel Richie... Thankfully the rest of the week we took it in turns with our personal choices and I could indulge in some New Model Army and the Cramps.
I'd forgotten half the stuff listed here but it's amazing how it stirs up a really vivid feel of the time just seeing the names!
I can almost smell the vinyl...