Glad to see Elizabeth Price win the Turner Prize. Pleased too that she mentioned her (similar to mine) Luton upbringing in her winning speech referencing arts cuts and threats to arts education in schools: 'It’s incredibly depressing listening to the comments people made earlier that a young girl from Luton going to a comprehensive might not be able to imagine being an artist and might not have the opportunities I’ve had'.

Leaving aside my bias, I do think her film 'Woolworths Choir of 1979' is the most powerful work in this year's Turner Prize exhibition at Tate Britain in London. It cuts together three sets of images, drawn from Church architecture, 1960s/1970s female music performance and most poignantly a fire at Manchester Woolworths in 1979 in which ten people died. The film both utilises a didactic public information style of address, and critiques it by refusing to tell people what to make of the connection between these three themes. The threads include the notion of the 'choir', the name for part of a church as well as a group of singers/dancers or chorus; and the common hand gestures of humans in disparate situations, the 'conspicuous twist of the wrist' shared by dancers and a desperate wave from a burning building.

The use of a real tragedy in this way is controversial, but the film's rescue from the archives of a chorus of voices from the time restores this tragedy to the public memory from which it has largely faded. It also calls into question how our familiar visual shorthand for historical periods (the kind of 1960s and 70s fashion, haircuts, and music used elsewhere in the film) excludes these kinds of less cosy and familiar events. 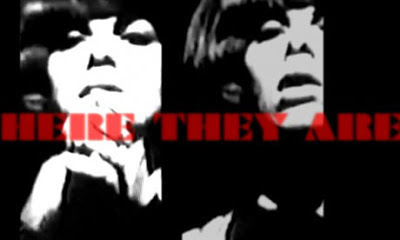 Liz was a founder member of 1980s band Talulah Gosh (as well as later performing as one half of The Carousel), and with that knowledge in mind you can't help but noticing some of the continuities - in particular the appreciation for girl groups. The Shangri-Las 'Out on the Streets' features prominently in the (pleasingly loud for a gallery) soundtrack to the film.

One of the interesting things about all four of this year's finalists is their links to sub-cultures/counter-cultures beyond the art world, either in their personal biographies or as reference points in their work. Well to start with there's Liz Price's indie-pop thing (and as mentioned here, even before she went to art school she was hand printing tickets for a 1985 Luton punk gig benefit for the local Unemployed Workers Centre with bands including Karma Sutra, Party Girls and Click Click - I helped out with that gig too, wish I'd kept the ticket!).

Paul Noble was involved in the 1990s Claremont Road/Leytonstone road protest against the M11. According to Josephine Berry Slater & Anthony Iles, 'Paul Noble who had been involved early on in the campaign began to fix home-made blue plaques onto derelict houses in the path of the road (a trick later copied by Gavin Turk to egotistical ends). The inscription on the plaques read: Our Heritage: This House was Once a Home'. Is it too fanciful to see in Noble's drawings of a fantasy city-scape some echo of the alternative urbanism of Claremont Road? 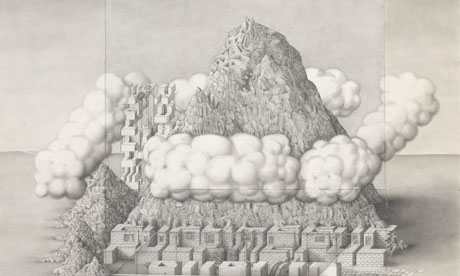 Luke Fowler's film about radical psychiatrist R.D. Laing (pictured below), All Divided Selves, can't help but feature lots of interesting archive footage from key 1960s/1970s counter-culture moments linked to Laing such as The Dialectics of Liberation 1967 conference at the Roundhouse, the London Street Commune and The Anti-University of London. 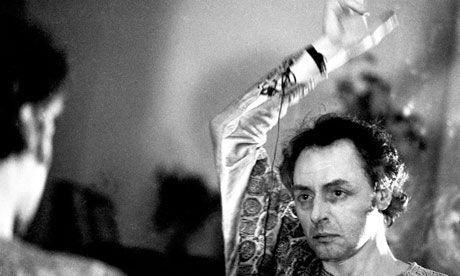 Meanwhile, Spartacus Chetwynd's performance art is pure Happening and embedded in a playful DIY/squat  aesthetic that can be traced back via Glastonbury Green Fields to Mutoid Waste Company and beyond (texts in her part of the exhibition inevitably mention Bakhtin's notion of the Carnivalesque, as well as less obviously Nikola Tesla) . As well as claiming now to live on a 'Nudist Commune' near Nunhead, Chetywynd participated in some of the !WOWOW! warehouse/squat events around Camberwell and Peckham (2003-2006), which also involved fashion designer Gareth Pugh in the days before he was making clothes for Beyonce and Lady Gaga. 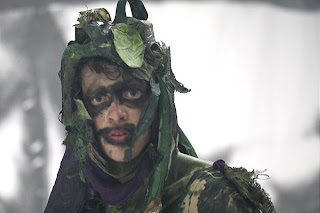