It's now been four months since Maria Alyokhina, Yekaterina Santsevich and Nadezhda Tolokonnikova were arrested and detained in Russia. Their alleged  'crime' was to perform an anti-Putin song with their punk band Pussy Riot in an unauthorised pop-up performance at a Moscow cathedral.

Last week they started a hunger strike in protest at the authorities threatening to put them on trial at short notice without them having time to view the 'evidence' against them. Back in the Cold War, people locked up for expressing their political views in the USSR were hailed as heroic dissidents by Western leaders.  Now David Cameron sucks up to Putin while the latter locks up his opponents.

Putin is likely to come to London on a 'private visit' during the Olympics. I imagine that anybody trying to demonstrate against him will also find themselves behind bars. 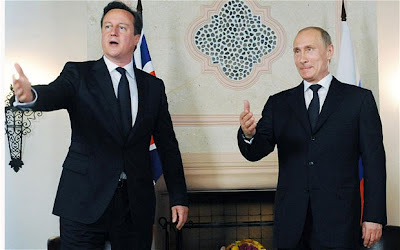 Posted by Transpontine at 5:33 pm