Blackheath Cavern, also known as Jack Cade's Cavern, was a  series of caves under Blackheath Hill in Greenwich South East London (presumably still there but no longer accessible). In the mid-19th century it was used for social events, including 'For one night only' on 'Monday November 16th 1846' a 'Grand Bal Masque' -  'The effect of Music in the Cavern is truly wonderful'. The advert promised that the cavern was to be turned into 'A capacious ball room, capable of holding 1500 persons', with a  'powerful quadrille band' providing the music at this 'Carnival in the Bowels of the Earth' (West Kent Guardian, 7 November 1846). 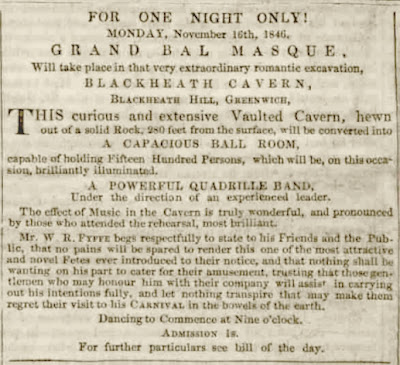 The following month the same promoter, Mr Richard Fyffe, put on another Masquerade at the St Helena Tavern, a pleasure gardens in Lower Road, Rotherhithe. Seemingly the Blackheath event had not gone well due to 'bad ventilation and excessive crowed. At St Helena Tavern, a 'Fashionable Place of Amusement' there was to be 'a complete wardrobe, containing every requisite for those Ladies and Gentlemen who may wish to appear in Costume' (West Kent Guardian, 5 December 1846). 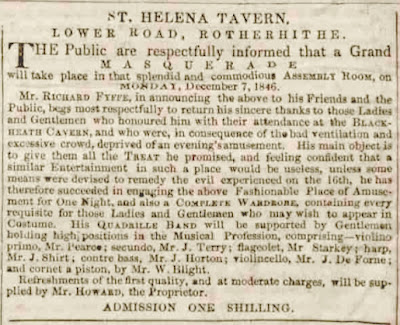 (Subterranean Greenwich blog originally posted these cuttings. Unfortunately that blog is currently down, as discussed here).

Posted by Transpontine at 5:51 pm