In the early/mid 1990s there were some big free festivals in London parks. Not pseudo-free festivals behind big fences with lots of private security, but proper sprawling mildy-chaotic events with sound systems, dance tents and lots of bands. Two of the biggest were the Deptford Urban Free Festival (in Fordham Park, New Cross) and the Hackney Homeless Festival.

The latter in Clissold Park, Stoke Newington in May 1994 aimed to raise awareness of homelessness, as the name suggests. The energy behind it came out of the squatting scene, but they did involve a locla street homeless hostel, McNaughton House. Up to 30,000 people attended with acts including The Levellers, Co-Creators, Spannerman, Back to the Planet and Fun Da-Mental. One of the stages was organised by Club Dog.

The police piled in after the festival outside the Robinson Crusoe pub, arresting 30 people as clashes erupted. According to one person present: 'A line of police in riot gear approached the pub, pushing people, telling them to go. That's when the glasses started flying. I saw one guy, who asked why they were doing this, get jabbed with a baton. I saw a woman in a wheelchair, who was obviously very distressed, being wheeled around roughly by a police policeman. It was completely unprovoked' (NME, 14 May 1994 - full article below) 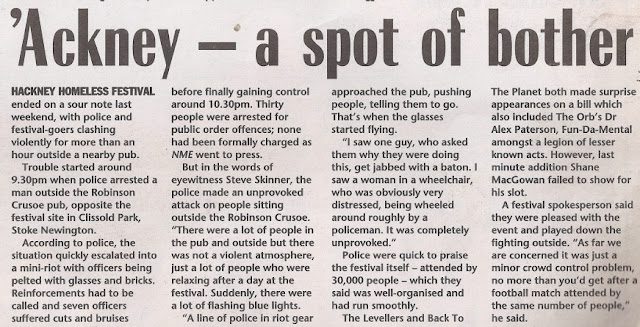 Some interesting video footage of the festival at Spectacle video archive.

For more on Hackney, see Radical History of Hackney: http://hackneyhistory.wordpress.com/
Posted by Transpontine at 4/08/2012 09:00:00 pm

The 90s were weird, weren't they? I'm told that around the same time there was a squatter camp in Queen's Wood in Highgate of all places.

The 91s were awesome :D Dunno about squatters in Highgate but I was living with some mates in an abandoned bank on Leyton High Street for a couple of months back in early 94, was great fun. Ended up having a party for my 21st there that turned into a 3 day rave, & about 1000 people turned up. Was one hell of a party even if a bunch of people did end up getting locked in the vault at one point haha, still can't remember how the hell we got them out or even if we did - hope they ain't still in there :P