Grayson Perry on punk and performance 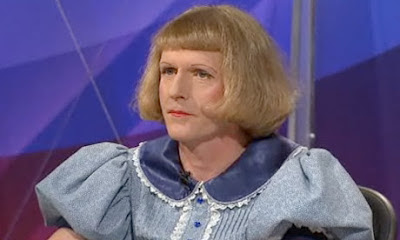 Grayson Perry's 'Portrait of the Artist as a Young Girl' (2007) is his memoir of the period before he became a successful artist, as related to his friend Wendy Jones.

Perry recalls growing up in 1960s/70s Essex with a taste for dressing up in women's clothes, before moving on to study art in Portsmouth and early 1980s performance art in London. He's a bit older than me, but like me and many others he was first exposed to punk as a paper boy:

'One Sunday morning I was delivering the newspapers when I saw the front cover of a supplement with a photograph of punks at a Sex Pistols concert. I was amazed by it, I though, 'Fucking Hell" This is good!'. I decided there and then I wanted to be a punk rocker'.

He went to see bands like The Vibrators, Boomtown Rats and Crispy Ambulance in Chelmsford, and attended the infamous debacle of the 1977 punk festival at Chelmsford Football Club, headlined by the Damned. The event was a flop with Perry opining that 'the most punk rock thing of the whole day' was when the scaffolder, furious at not being paid, began dismantling the stage while the bands were still playing.
﻿
﻿
After leaving college in 1982 he moved to London where he was part of the post-New Romantic/Blitz kids scene. He lived in the basement of a squat in Crowndale Road next to the Camden Palace, with Marilyn (soon to be a short-lived popstar) living upstairs. Perry 'used to go to the Taboo nightclub in a black suit with skin-tight Lycra trousers and a jacket two sizes too small... I put sunburn-coloured make-up on my face and left white rings round my eyes, like ski goggle marks... And I had a tail. It was a stiff, furry dog's tail'.

He also got involved with the Neo-Naturists, a performance art troupe who performed naked with paint on their bodies. They played at places like Notre Dame Church Hall (Leicester Square), Heaven, the Camden Palace. the Fridge (Brixton) and an anarchist centre:

'we were booked to do a Neo-Naturist performance in Brixton at the Spanish Anarchists Association, which was similar to a working men's club, an extremely anachronistic place that had become somehow hop because of punk's associations with anarchy. As it was May Fiona though we should do a Communist, May Day-themed cabaret. Cerith [Wyn Evans], Fiona, Jen, Angela and I all had identical Communist uniforms body painted on to us with khaki paint and we decorated oursevles with big red five-pointed stars... There were around a hundred anarchists in the audience as well as some punks and they all hated it, not one of them clapped, the room was dead quiet'.

I think Perry may have got two different places mixed up here - the 121 centre in Brixton opened in 1981, but the Spanish anarchists' place was Centro Iberico (421 Harrow Road), a squatted school where various punk gigs and other events took place (incidentally producer William Orbit started out with a studio here). The Neo-Naturists site mentions them playing a 1982 May Day event at 'Spanish anarchist centre, Harrow Road' so assume this was what Perry remembered (maybe he went to 121 another time).
﻿
﻿
Posted by Transpontine at 5:00 am