Some sheep, some homeboys and a funki dred

The annual Lambeth Country Show in Brixton's Brockwell Park - held this year on the 17th & 18th July - is a slightly surreal weekend combining music, food stalls and a fairground with agricultural elements rarely encountered in inner city South London, such as sheep shearing and horse riding displays (not forgetting owls and llamas).

On the Saturday, musical highlights included an acoustic set from the Alabama 3 and a DJ set from Jazzie B/Soul II Soul. 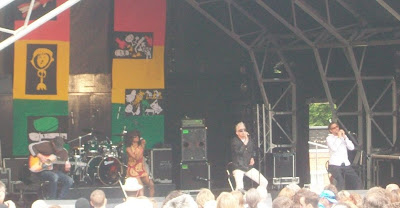 The former (pictured above) might have made it on the global stage via providing the theme tune to The Sopranos but they are very much the house band to Brixton druggies, drinkers, post-ravers, mental health system survivors and (as)sorted radicals. They started out with a singalong 'You are my Brixton' before moving on via Woke up this Morning to a modified Johhny Cash cover - Brixton Prison Blues.

Alabama 3 always like to support good political causes, including prisoners in miscarriage of justice cases. This time the focus was on a struggle closer to home, with singer Larry Love being joined by his kids to voice opposition to the threatened closure of the Triangle Adventure Playground by the Oval. 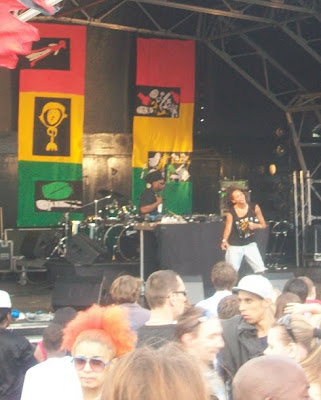 Jazzie B was joined by MC Chickaboo for a wide ranging set that got the crowd dancing to mash ups of Kellis's Milkshake with Billy Jean; and Seven Nation Army with Public Enemy's Bring the Noise, among others. Further ingredients in the mix included James Brown, Dizzee Rascal, Beyonce, Deelite, Nirvana and Ray Charles. All of this plus tantalising snatches of his hits with Soul II Soul - most notably the opening bars of Keep on Movin' followed by some heavy drum'n'bass. And yes he did sign off with the Soul II Soul motto of 'a happy face, a thumpin' bass, for a lovin' race.'

Like the Alabama 3, Soul II Soul's history is bound up with Brixton (even if Jazzie B is a north Londoner) - in their case their famous sound system Friday nights at the Fridge in the 1980s were a key stepping stone on to making their own records and international success.