'The Rhythmic or Throbbing Crowd' (Canetti)

From the chapter on Rhythm in Elias Canetti's Masse und Macht (1960), translated as 'Crowds and Power':

'Rhythm is originally the rhythm of the feet. Every human being walks, and, since he walks on two legs with which he strikes the ground in turn and since he only moves if he continues to do this, whether intentionally or not, a rhythmic sound ensues. The two feet never strike the ground with exactly the same force. The difference between them can be larger or smaller according to individual constitution or mood. It is also possible to walk faster or slower, to run, to stand still suddenly, or to jump.

Man has always listened to the footsteps of other men; he has certainly paid more attention to them than to his own. Animals too have their familiar gait; their rhythms are often richer and more audible than those of men; hoofed animals flee in herds, like regiments of drummers. The knowledge of the animals by which he was surrounded, which threatened him and which he hunted, was man’s oldest knowledge. He learnt to know animals by the rhythm of their movement. The earliest writing he learnt to read was that of their tracks; it was a kind of rhythmic notation imprinted on the soft ground and, as he read it, he connected it with the sound of its formation.

Many of these footprints were in large numbers close together and, just by looking quietly at them, men, who themselves originally lived in small hordes, were made aware of the contrast between their own numbers and the enormous numbers of some animal herds. They were always hungry and on the watch for game; and the more there was of it, the better for them. But they also wanted to be more themselves. Man’s feeling for his own increase was always strong and is certainly not to be understood only as his urge for self-propagation. Men wanted to be more, then and there; the large numbers of the herd which they hunted blended in their feelings with their own numbers which they wished to be large, and they expressed this in a specific state of communal excitement which I shall call the rhythmic or throbbing crowd. 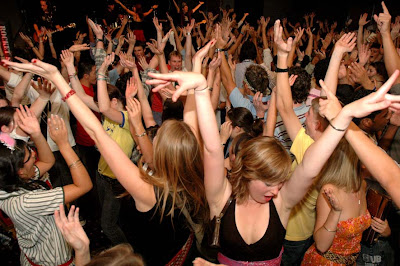 The means of achieving this state was first of all the rhythm of their feet, repeating and multiplied, steps added to steps in quick succession conjure up a larger number of men than there are. The men do not move away but, dancing, remain on the same spot. The sound of their steps does not die away, for these are continually repeated; there is a long stretch of time during which they continue to sound loud and alive. What they lack in numbers the dancers make up in intensity; if they stamp harder, it sounds as if there were more of them. As long as they go on dancing, they exert an attraction on all in their neighbourhood. Everyone within hearing joins them and remains with them. The natural thing would be for new people to go on joining them for ever, but soon there are none left and the dancers have to conjure up increase out of their own limited numbers. They move as though there were more and more of them. Their excitement grows and reaches frenzy.

How do they compensate for the increase in numbers which they cannot have? First, it is important that they should all do the same thing. They all stamp the ground and they all do it in the same way; they all swing their arms to and fro and shake their heads. The equivalence of the dancers becomes, and ramifies as, the equivalence of their limbs. Every part of a man which can move gains a life of its own and acts as if independent, but the movements are all parallel, the limbs appearing superimposed on each other, They are close together, one often resting on another, and thus density is added to their state of equivalence. Density and equality become one and the same. In the end, there appears to be a single creature dancing, a creature with fifty heads and a hundred legs and arms, all performing in exactly the same way and with the same purpose.

When their excitement is at its height, these people really feel as one, and nothing but physical exhaustion can stop them... Thanks to the dominance of rhythm, all throbbing crowds have something similar in their appearance'. 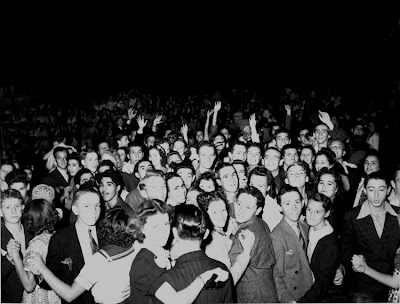 We can only assume that when Canetti talks of 'man' he means 'woman' too! Photos: top, a dance at the University of Sydney; bottom, dancers at Poe Park in the Bronx, New York, September 4 1938.

Posted by Transpontine at 6:40 pm

The German word "Mensch" is quite often translated as "man" when more accurately it means "human being", so the gendered terminology might well have been introduced by the translator.