I am hoping to get to the Photographers Gallery (London) next week for an exhibition on 1950s Soho Nights which apparently includes some images by Ken Russell. I am sorry I missed the Bombsite Boudiccas exhibition a couple of years ago, featuring pictures Russell took of London Teddy Girls in 1955. 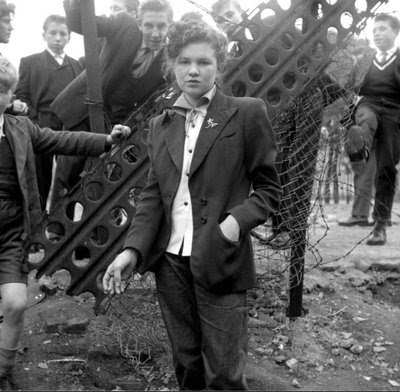 For the launch of the exhibition at the Spitz in East London, the organisers tracked down some of the women in the photographs, as reported in the Times:

'"We weren’t bad girls,” says Rose Shine, then Rose Hendon, who was 15 when she posed for Russell. “We were all right. We got slung out of the picture house for jiving up the aisles once, but we never broke the law. We weren’t drinkers. We’d go to milk bars, have a peach melba and nod to the music, but you weren’t allowed to dance. It was just showing off: ‘Look at us!’ We called the police ‘the bluebottles’ – you’d see them come round in a Black Maria to catch people playing dice on the corner. But we’d just sit on each other’s doorsteps and play music.”

The teddy girls left school at 14 or 15, worked in factories or offices, and spent their free time buying or making their trademark clothes – pencil skirts, rolled-up jeans, flat shoes, tailored jackets with velvet collars, coolie hats and long, elegant clutch bags. It was head-turning, fastidious dressing, taken from the fashion houses of the time, which had launched haute-couture clothing lines recalling the Edwardian era. Soon the fashion had leapt across the class barrier, and young working-class men and women in London picked up the trend.

...Rose and her group of West End teddy girls would meet at the Seven Feathers Club in Edenham Street, North Kensington, a youth club popular with both the boys and the girls. “There was a jukebox and dancing,” she says. “Just tea and cakes, because we didn’t go to pubs then. It wasn’t until we were 20 that we might go to the pub. We weren’t bad, not like some of the boys. There was this song called Rip It Up… Well, the boys, they used to go and rip the seats.” 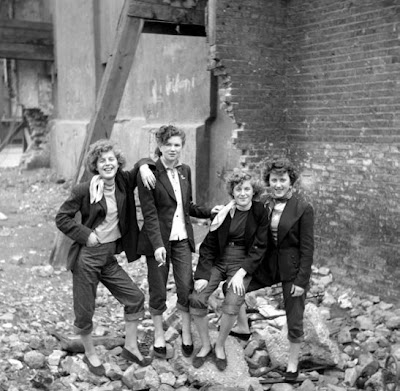 ...Teddy girls from different parts of London rarely mingled. Grace Curtis (then Grace Living) was one of the girls Russell photographed in the East End. “We hung out down the Docklands Settlement – a club where there was space for dancing and boxing. We were East End. In those days you just stuck to your area. There was a little snack bar in the club where you could buy drinks and we just all got together and danced.”

Both women hoot with excitement when they remember dancing The Creep by Ken Mackintosh – a slow shuffle of a dance so popular with teddy boys that it led to their other nickname of “creepers”. “It’s the best dance,” says Curtis. “You used to dance or jive with your girlfriends, but for The Creep you could choose your partner. You could pick up a fella and go and dance with him.”

(more at When the Girls come out to play, Times, 5 March 2006)
The bottom photograph shows Elsie Hendon, 15, Jean Rayner, 14, Rosie Hendon, 15, and Mary Toovey on a bombsite in Southam Street, North Kensington, West London.
Posted by Transpontine at 8:54 pm

Tremendously fascinating piece- and remarkable photos. Comparisons are naff and all that, but it is hard to imagine 14 year old girls- or boys- dressing like that today... Thanks as always for your extraordinary blog.

Thanks Jeff, I guess even in the 1950s it was a small minority who really went for it on the clothes front. Having spent Saturday in London clothes shops including Beyond Retro and American Apparel I can report that there are still some very coolly-dressed teenagers in London.

Hi, I'm an undergraduate at the University of Oxford looking to do a thesis on the Teddy Girls. I was just wondering where you found your information from about the Teddy Girls and if you knew where the Ken Russell collection of Teddy Girl photos was now? Please contact me at teddygirlhistory@gmail.com

I would really appreciate your help.