The Ultimate Leisure Workers Club is an interesting project based in Vilnius in Lithuania focused around the radical politics of clubs and parties:

'Insurgent workers’ minds and bodies turned u on dance-floors long ago, anticipating their liberation from the factory's mechanistic discipline. Clubs were sites that integrated political education and entertainment; social recovery and antagonistic social articulation. Then arrived the weekend, ripe with evening temptations, as both a working class victory and a bargain with capital for an ever more dutiful submission to the pains of the working week. Whether mere toxic retreats into a world of purchased pleasures serviced by instrumentalized hospitality workers; or as maddening aspirations toward collective self-abolition in the crushing beat of capitalist ruins, spaces of nightly leisure are energized by a social desire for what Kristin Ross calls communal luxury: a communistic drive for collective prosperity that capitalism recuperates and exploits.

The Ultimate Leisure Workers' Club hopes to draw from these political potentials, linking up with groups and individuals involved in the struggle to open new terrains for social liberation and communal joy in the night and beyond'.

They are holding an online assembly next week, and as part of it me and Christoph will be giving a talk:

'Neil Transpontine and Christoph Fringeli will discuss the seminal Dead by Dawn parties held between (1994-1996) at the squatted 121 Centre at Railton Road Brixton. Crossing self-publishing, visual and sonic experimentation, exploratory theory, social spaces, new communications technologies and the emergence of ludic and networked politics, the Dead by Dawn parties were a catalyst for exploring a leisure time clawed back from the social compulsion to labour.

Christoph is the founder of Praxis Records and the editor of Datacide magazine for noise and politics. He was part of the collective responsible for Dead by Dawn. Neil Transpontine attended Dead by Dawn and has written about it for his blog History is Made at Night. He is a regular contributor to Datacide magazine' 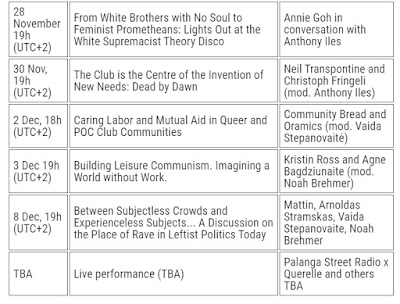 For previous posts about Dead by Dawn see:

Posted by Transpontine at 10:07 am