Here's an account of  a short-lived radical radio intervention in North London. The Islington pirate radio station broadcast on 230 metres medium wave at the time of the North Islington by-election in October 1969.  Those involved were inspired by the Irish civil rights pirate radio operating in Belfast and Derry, and by pirate broadcasts earlier in the 1960s by the anti-nuclear weapons Committee of 100.

The article 'Political Pirate Radio' was published in radical paper Black Dwarf, 16 January 1970, explaining that 'a group of Islington revolutionary socialists got together the organisation and apparatus for a less conventional attack on people's boredom with politics. With the struggle in Derry and Belfast in mind, they transmitted within the election boundaries an hour-long pirate radio programme every night in the week before polling. We draw a veil over the participants - except that IS [International Socialists] members want a mention to show they're not such fuddy-duddies after all, and anarchists to show they're quite capable of complex political organisation'.

The programmmes consisted 'of interviews with people in social groups whose problems cannot be solved - and are not even expressed - through ballot box politics. The voices were: a tenant; an Irish worker, a housewife, a schoolboy, a black organiser, and an unofficial strike'. 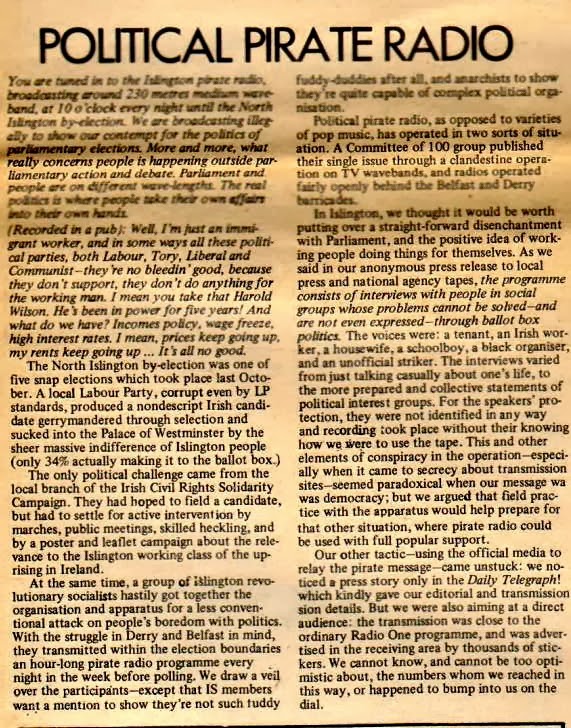