When Margaret Thatcher resigned as Prime Minister in November 1990, me and my workmates at a north London hospital invited some like minded people over to our HIV unit to share a bottle of champagne. Later some of us went down to a party in Trafalgar Square to continue the celebrations. Although Thatcher was forced out of power by a Conservative Party leadership challenge, there was no doubt even then that the poll tax movement, including the riots in central London on March 31 1990, was a major factor in her fall from grace.

After ten years or more of defeats at the hands of Thatcher and her cronies it felt great to have been part of something that had shown that they were not invincible, even if it didn't turn out to be quite the political turning point we'd expected - within a few months we were engulfed in the horrors of the Gulf War.

The end of Thatcher's career was a politically significant event - the death from natural causes of a very old woman many year later in her bed is not. But the Margaret Hilda Thatcher who died in the Ritz Hotel was only a minor component of the mythical 'Margaret Thatcher' that dominated Britain in the 1980s. The mythical Maggie was an almost superhuman figure, single-minded, all-powerful, ruthlessly vanquishing her foes and transforming the country and indeed the world on a couple of hours sleep a night. This myth of the Iron Lady was carefully cultivated by Conservative party strategists and a fawning press. But it was also built up by opponents on the left who credited her with a new doctrine of 'Thatcherism' and more broadly by all those who turned her into a symbol of secular evil (a witch, no less) and who chanted endlessly on demos 'Maggie, Maggie, Maggie, Out, Out, Out' as if what later became known as the neo-liberal offensive against the working class was a one person operation.

If you go back now and read contemporary radical analysis of the 1970s it is striking how much of what was later branded as Thatcherism had already been identified before she even came to power .  For instance, 1978's Policing the Crisis by Stuart Hall et al saw the 'The Law and Order Society' taking shape throughout the 1970s, under both Labour and Conservative governments, with the post-war consensus breaking down as a result of economic crisis. Of course Thatcher's government may have accelerated some of these tendencies, but they were neither new nor Thatcher's idea (Brendan O'Neill's 2008 piece on The Myth of Thatcherism is lucid on this, though I'm still open to argument that there were some novel features of the Thatcher regime, such as deliberately pitching its appeal to upwardly mobile working class people).  Her global role is also exaggerated and distorted - the supposed champion of freedom wasn't quite the ally of Polish workers that she sometimes pretended to be, and she backed the murderous leftist Khmer Rouge in Cambodia as well as the murderous rightist Pinochet in Chile.

Still if the myth was... well a myth... the pain was real.  Thatcher was the figurehead for a regime which oversaw state violence, economic misery and mass tragedy with seeming indifference to the lives of those affected. For people in or around the mining industry, the 'Battle of the Beanfield', the nationalist community in the north of Ireland, Hillsborough and more, it was personal. In fact much of what was dismissed as left wing paranoia at the time has been proven to be true - yes, the police really did lie and cover up what happenened at Hillsborough; yes, British agents really were involved in the murder of Irish lawyer Pat Finucane etc. etc.  So no great surprizes that Thatcher's death has prompted celebrations in Belfast, Brixton, Bristol and Glasgow, and by Liverpool fans, among others.


Last night's anti-Thatcher party in London's Trafalgar Square felt like a gathering of some of the scattered remains of Thatcher's Enemy Within. Among the 2-3,000 in the rain, there was an Irish tricolor and starry plough flag, a National Union of Mineworkers banner (shown below), and plenty of ageing punks, anarchists and socialists. 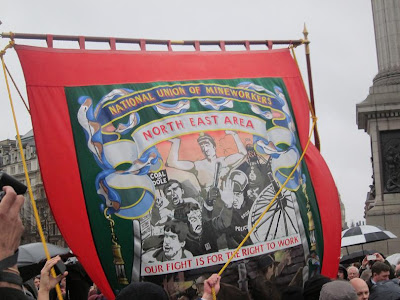 I went along despite some misgivings... In terms of a political response to the situation we face today, rehashing the 1980s is a dead end. What confronts us not a hangover from a 1980s political project ('Thatcherism') but a global economic system that seems incapable of matching the enormous potential of human creativity with even the basic human needs for shelter, security and a half decent standard of living, no matter which politicians appear to be in charge... Getting older and having to deal with the death of friends and family has also robbed me of taking any pleasure in other people's bereavement, even if in 1984 I would have been quite happy to see the Cabinet blown up in Brighton... And yes it's just as problematic today as it was in the 1980s to go on about a woman, even a Prime Minister, as a witch and a bitch... 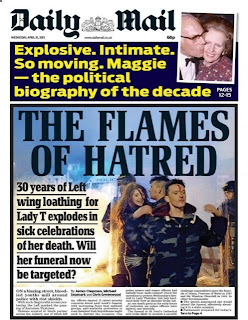 Still I went to Traflagar Square, partly because having lived through the rest of the story I felt I had to be there for the final chapter, partly because I wanted to show my solidarity with those victimised by the press including individuals named and shamed in national newspapers for just liking a facebook page. Some people were there to gleefully dance on Thatcher's grave, others just wanted to remember those who died and suffered under her rule. As a party it wasn't great, it was pouring with rain and the music was limited by the police stopping sound systems, quoting Trafalgar Square bye-laws (of course there were some samba drummers). 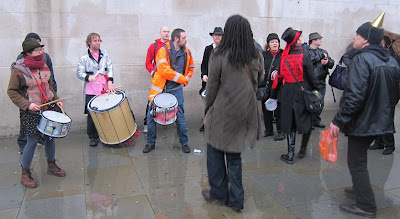 Still the point was made - whatever else people might think about this week's anti-Thatcher parties and related campaign to put Judy Garland's Ding Dong the Witch is Dead to the top of the charts* they have blown a hole in the fake national consensus that would have celebrated Thatcher as a political saint. The ghosts of the struggles of the 1980s have re-emerged to challenge their erasure from history - even if they do not point a way forward they cannot be forgotten and still have much to teach us.

* Ding Dong the Witch is Dead' ended up as number 2 in the 'official' BBC Charts, although it topped the iTunes chart for much of the week. 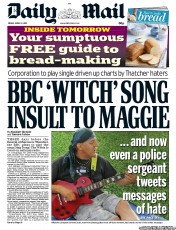 Did you attend this bad boy? ;)