KRS-Dan on Flickr has been uploading some yellowing newspaper clippings from the acid house era. This one from the Sun, 2 November 1988, sums up the late Thatcher period. A ludicrous acid house 'trip to hell' cartoon next to an image of Margaret Thatcher as Superman! 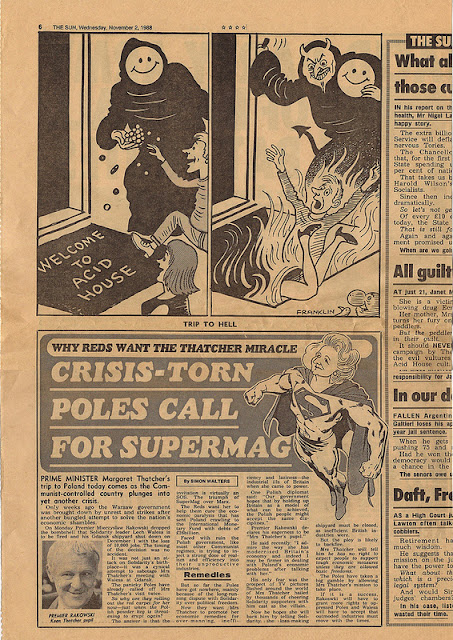 Well with Duke Dumont's slice of retro-house Need U topping the UK charts in the week of Thatcher's death, we can safely say that house music has outlasted her. Even if bizarrely Need U has been knocked off the top slot by people buying Judy Garland's Ding Dong The Witch is Dead to mark the demise of the one-time Iron Lady.

'First she came for the milk. Then she came for the mines. Then she ran out of things to come for, so she went after the soccer fans and acid house. It might sound unlikely in an age where there are a pair of TV screens showing Sky Sports in every pub in the UK, but if you wanted to go toe-to-toe with the establishment at the tail end of the Thatcher years, the fast track to getting a beat down from the police was to watch soccer or listen to a series of repetitive records with the intention of dancing.


If you were looking for a measure of how the country has adjusted since Thatcher's reign, you could do worse than consider how two constants of the modern mainstream—soccer and electronic music—were once painted as folk devils by a regime fast running out of new things to point its police horses at... for young people, the harshness of the establishment’s war on the twin evils of soccer and dance music came as something of a surprise. It wasn’t till I fled a party in Dalston in 1989 that I felt it firsthand. The motivation for my hasty departure was the sudden entrance of a group of cops based at Stoke Newington Police Station who were notorious in the area for their thuggery. They'd come in, take the numbers off their uniforms, and break things up about as violently as they could without firearms, swinging at male and female ravers alike...'
Posted by Transpontine at 7:59 pm

I remember those headlines - I was a 14 year old paper boy at the time and read all the stories about ecstasy and acid house with complete fascination.

Obviously it had the opposite effect to that intended, in making me more rather than less curious.

Strange to see the moral, almost religious tone being used as well.