Norfolk Police smash up speakers - and boast about it


'Officers from Norfolk Constabulary have re-iterated their zero-tolerance of unlicensed music events by destroying seized equipment The speakers, generator, amplifier and cables were confiscated following a rave in Feltwell Woods, West Norfolk on 4 March. The offender was fined £100 plus costs and a destruction order for the equipment was issued by the courts.The equipment was destroyed by officers at King’s Lynn police station on Tuesday 11 December 2012. The items destroyed were:
The video shows a hammer smashing up the which could obviously have been put to good use, and indeed a local music charity 'Community Music East called it a "waste of equipment" that could be used by the county's "under-resourced" groups'. Bizarrely a police spokesperson told the BBC (13 December 2012) that "If the equipment was sold or donated there is a possibility it could be used for unlicensed music events in the future." Well that would apply to any musical equipment, why not send the police round to music shops with their big hammers and smash up all the amps and speakers in case they end up at a free party! 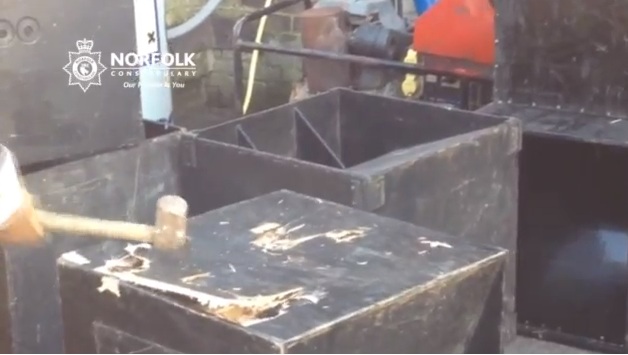 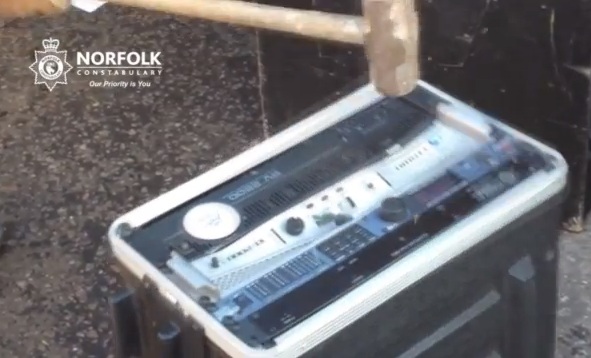 Not a great bit of PR - as of last night tonight it had received 4 likes, and 311 dislikes.

As covered here before, Norfolk has been the focus for an ongoing cat and mouse struggle between police and sound systems. Here's a couple of other recent examples:

‘Police were called to a disused quarry in North Creake over the weekend after reports of around 700 people arriving for an illegal rave. Police first received a call to the unlicensed music event at around 10.30pm on Saturday night, the event was located on a remote area of land that is difficult to access by vehicle. Police air support were used overnight, in addition to officers on the ground, a local gamekeeper and farm manager to monitor the situation and bring the event to a peaceful and safe closure. Sound equipment and a van were seized from the site, and police made two arrests for possession of drugs with intent to supply. Police noted all vehicles leaving the site and many were searched with several dozen drivers being breathalysed, but none were found over the limit for drink or drugs. (Lynn News, 22 October 2012)


‘Two men have been convicted of organising an illegal rave, which attracted about 200 people to a site near Beccles. The pair, who pleaded guilty when they appeared at Great Yarmouth Magistrates’ Court yesterday, [Monday, October 15] were told thousands of pounds of equipment, seized by police at the July 14 rave at Gillingham, would not be returned to them… The pair pleaded guilty to a charge of committing unauthorised licensable activity under the Licensing Act 2003, after the court heard the rave attracted about 200 people and caused “extensive damage to property”. They were also each given a two year conditional discharge, ordered to pay £150 compensation to the farmer and £85 costs… The court heard that R. had sent text messages to a large number of people, saying “the number for the Norfolk party is” followed by a mobile telephone number, and “keep it off Facebook...pass on to safe ravers.” It also read “see you rigside” – a reference to the large set-up of speakers and amplifiers used to play loud music, known as a “rig”.

Gary Mayle, prosecuting, said that when asked by police if the turntables were his, M. said: “It would be pretty hard to have a party without them.” Items seized also  included 18 speakers, five electrical power generators and four “disco light projectors”(Norwich Evening News, 16 October 2012).

Posted by Transpontine at 10:49 pm

So they steal expensive equipment and smash it up on YouTube then boast about it, any fool can see who the real criminals are.

Maybe if we wasn't paying so much bloody tax we would rent out more venues and do legal events but that is never going to happen. so make it harder to get to. yoursinseraly a rig owner.