Returning to the historic usages of the term 'rave', here's some examples from the1960s.

At the 'Shoreline Club' in Bognor Regis they were promoting 'All Nite Raves' in 1966. The club described itself as 'The only Beatscene on the South Coast' and had a 'Snuggery open all day free to members' (source: The Untamed) 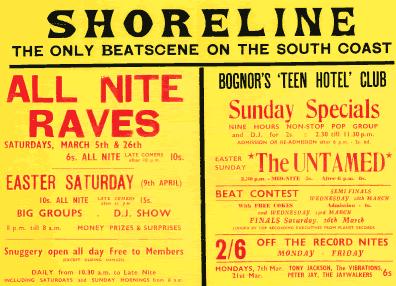 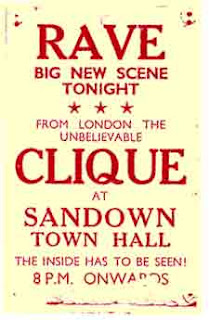 1965 'All Nite Rave, Midnight to 6 am' at Club Noreik, Tottenham High Road
(image from White Fang's Who site):

An advert from 1964 for Leo's Cavern Club at the Olympia Ballroom in Reading. Note that on October 13th they were promoting an 'R & B Rave'. 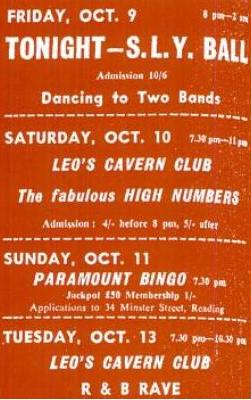 Source: Anyway, Anyhow, Anywhere: The Complete Chronicle of the Who 1958-1978 by Andrew Neill abd Matthew Kent (The High Numbers mentioned in the advert were The Who in an early incarnation)

Posted by Transpontine at 5:30 am

We met people from all over the south of England. We were all blocked & had a great night every Saturday loved it.

I would love a photo of the shoreline I loved that club such great times. Oh for one more night and a handful of blues .anyone out there has a photo Please.

Hi percussion I'd love to have some photos of the shoreline. Have only just read your message.
Mike

Be happy to send pictures of the Shoreline to you.
blair.montague-drake@westnet.com.au

just stumbled on this sight ,, am desperate for a couple of pics of the shoreline, went there many weekends ,,oh the memories

Hi Phil, just found this info, I am just about to start running shoreline club nights again in Bognor, if you pick this up and can share some pics and memories it would be really helpful.

Was here every weekend......
(when I was supposed to be staying at my friend
Betty's house!)
Sorry Mum & dad....
Partied all night...
left at 8 in the morning,
had full English Breakfast
at the café next door
and beached it all day.
Oh happy days! Mike
Killick...
were you from Southampton/Eastleigh?

You lived the life as a sinful youth, hang onto those memories so many today could never recreate those moments of splendour, even though we do try to keep the spirit alive.

Listening to The Action rite now 😎

Hi lollipop yes I'm from Southampton/ Eastleigh. I guess I know you or have met you in those great times. Where are you from

Hi lollipop if you come back to this site I would love to know where you are from. I'm sure we must have met would be nice to catch up. I don't suppose you have any photos of the shoreline.
Happy new year 😀

Anyone got a photo of the shoreline club . I loved that club would love a picture

Hi anyone please has anyone any photos of the shoreline. I loved the placed . A lot of us from Eastleigh used to go. We also new many from all over the south from going especially Kathy and Rosie's from gosport great girls we all became great friends.

Lollipop or anyone from the old shoreline days have you any pics of this great club . Go in Saturday night out blinking at the daylight Sunday morning great times great club.

hi mike yes from bishopstoke..you and i were best friends at one stage if my memory serves me well...lorraine dorman

Hi lollipop great to hear from you ' I remember you well . We were great friends and had great times. I have emailed you hope you get it 😎
Mike

Hi lollipop I'm not sure if you received my email or not. Did you go to the shoreline with Liz or Betty B. I'll email you again if that's ok
Mike

Malcolm Rye
That was one of the best clubs on the scene in those day ....lost many hours there and good memories.

Hi Malcolm,I agree it was such a brilliant club , I think my favourite of all the clubs and we went to a lot. In on a Saturday out Sunday morning what great nights we had. I can't find any pictures of the shoreline anywhere if you know of any let me know. Great memories

Was only 10 at the time but could hear the music but never realised who wes playing there, my nan lived in belmont street right behind the club so i could stand in the back garden and listen to the music great days 👂👍🏻