Seize the Time was a collection of songs by Elaine Brown released in 1969, with song titles including Seize The Time, The Panther,  And All Stood By, The End Of Silence, Very Black Man and Poppa's Come Home among others. 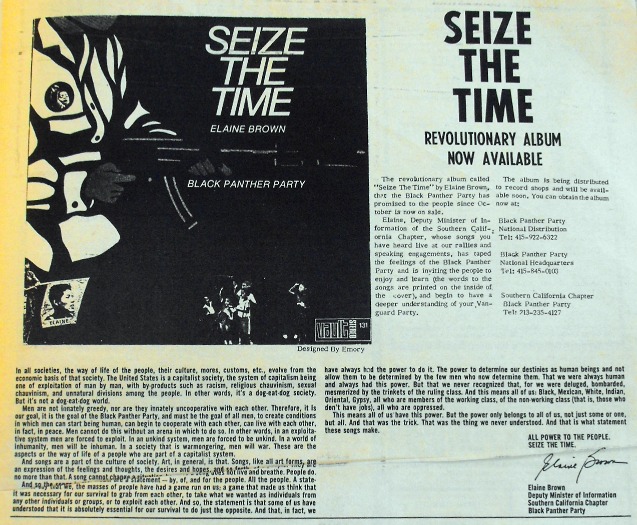 'songs are a part of the culture of society. Art, in general, is that. Songs, like all art forms, are an expression of the feelings and thoughts, the desires and hopes, and so forth, of a people. They are no more than that. A song cannot change a situation, because a song does not live and breathe. People do.

And so the songs in this album are a statement – by, of, and for the people. All the people. A statement to say that we, the masses of the people have had a game run on us; a game that made us think that it was necessary for our survival to grab from each other, to take what we wanted as individuals from any other individuals or groups, or to exploit each other. And so, the statement is that some of us have understood that it is absolutely essential for our survival to do just the opposite. And that, in fact, we have always had the power to do it. The power to determine our destinies as human beings and not allow them to be determined by the few men who now determine them. That we were always human and always had this power. But that we never recognised that, for we were deluged, bombarded, mesmerised by the trinkets of the ruling class. And this means all of us: Black, Mexican, White, Indian, Oriental, Gypsy, all who are members of the working class, of the non-working class (that is, those who don’t have jobs), all who are oppressed.

This means all of us have the power. But the power only belongs to all of us, not just some or one, but all. And that was the trick. That was the thing we never understood. And that is what statement these songs make. All power to the people, seize the time’ (Elaine Brown, Deputy Minister of Information, Southern California Chapter, Black Panther Party) 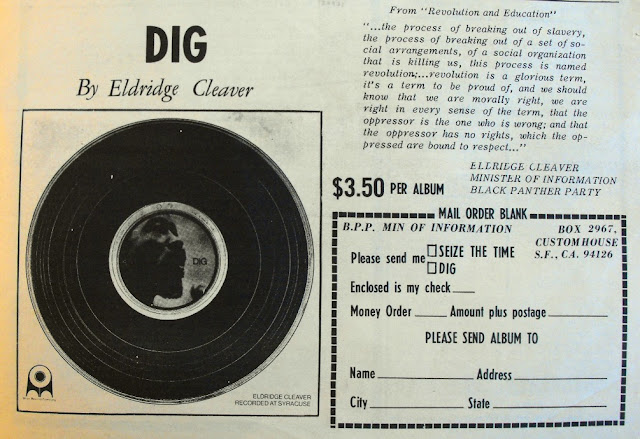 Dig featured a recording of  a speech given by Eldridge Cleaver, Minister Of Information for the Black Panther Party at Syracuse University in July 1968. 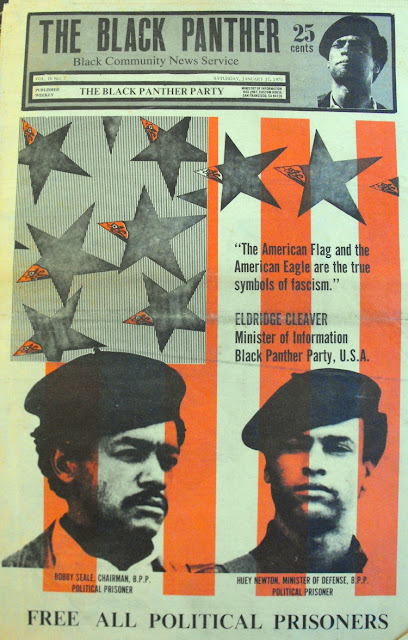 (I found this amongst a number of issues of the paper at the South London Black Music Archive, an exhibition in Peckham)
Posted by Transpontine at 5:30 am