... or even vote for Gloria Estefan? And why are some anarchists and socialists cheering for border controls?

Continuing our series on pop stars with a sounder grasp of migration politics than has been seen so far in the British elections, good to see that Gloria Estefan joined Saturday's May Day migrant workers demonstration in Los Angeles (see also Amerie and Shakira). The demonstration was protesting against the new Arizona laws and for regularisation of undocumented migrants. She said: 'We came as refugees to this country that gave us many opportunities... We join with you today so that they will know that we immigrants are honest, workers, to show the beautiful face that we bring to this country, always respecting the laws. If everyone looks back, everyone is an immigrant in this country... We don’t want to link the word ‘immigrant’ with ‘criminal''.


There's lots of reports and photos of the Los Angeles demonstration at LA Indymedia. I've selected these two, taken by Robert Stuart Lowden, as they illustrate what is lacking not only from mainstream British political discussion about migration but from the arguments of those socialists and anarchists who now seek to justify immigration controls on some spurious 'working class' grounds that immigration undercuts wages - see for instance Paul Stott and the Independent Working Class Association. Namely the human cost of immigration controls. 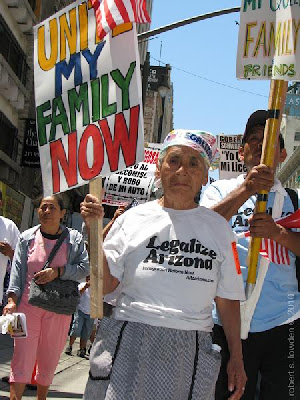 Immigration controls are not a matter of turning on and off a tap, capping numbers in some cosy neutral way - 'sorry old chap, we're full today'. They are ultimately a policing function: workers dragged out of their workplaces, locked up and put on to planes, their children likewise dragged out of school. Families separated by force. Children locked up in prison. Deaths as people take risks to get round these controls - at least 87 on the US/Mexico border in the last 6 months; almost 4000 amongst people trying to enter Europe since 2002.

It may be true that in some sectors having a larger pool of labour is allowing employers to reduce wages, but the answer to that is workers solidarity not vicious border controls (what other kind are there). It is also true that many of these workers have struggled to get here at great risk, hardly flown in by capitalists. While the wages of some workers may on occasions have been undermined, other workers are earning much more here than they were at home and are also supporting families in their home countries. Also migration controls in Europe and in the US can depress wages elsewhere - since employers know it is difficult for workers to leave and therefore don't have to pay higher wages to keep workers in their jobs. 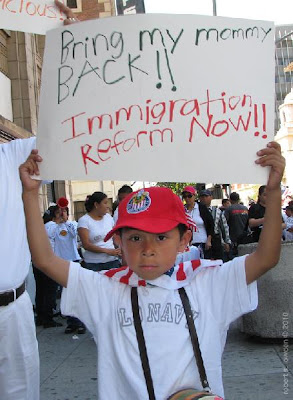 In any event it is precisely these immigration controls now seemingly supported by some former anti-fascist militants in the UK - the IWCA is the remains of Red Action - that place migrant labour in a precarious position and undermine wages (e.g. the fight by cleaners for better wages is being undermined by companies having the power to turn over strikers to the Borders Agency). The way to stop this is to fight for migrant workers to have the same rights and conditions as everybody else - this would benefit non-migrant workers too as employers wouldn't be able to play one off against the other.
Posted by A2 at 10:10 pm

The most extreme case of pro-immigration control "anarchism" is the so-called National Anarchists who protested the SF mayday march - see http://antigerman.wordpress.com/2010/05/04/national-anarchism-sic-cont/ Clearly, in their case "anarchism" is an empty style gesture, as no anarchist could really support borders.

I don't think Paul Stott is anywhere near in this camp. I don't think he is actually advocating immigration controls, just arguing that the left needs to understand concern about immigration.

I think we need to make a stronger case against borders than simply shouting the slogan, a case that will appeal to those who are not already anti-authoritarian revolutionaries.

And that is exactly why Amerie and Shakira and Gloria's interventions are so welcome!