July Days in London: Trump as Tyrant Monster and our opposition

I've been thinking again about the Trump phenomenon. As many have pointed out, plenty of other US  Presidents have presided over racist penal systems, nationalist sabre rattling and domination by corporations. Why is Trump any worse? Well partly because he represents an attempt to turn the clock back on some of the limited social progress that has been made in the past 50 years, in the process unleashing overt racism and legitimising the extreme right at home and abroad. But he also prompts  fear because of his very unpredictability  - he is not simply a smooth front man for capitalist business as usual, but someone who creates an impression that his personal power comes before everything, and that therefore nothing is sacred and nobody is safe. There is something almost archetypal here - he is like the 'tyrant monster' described by Joseph Campbell in 'The Hero with a Thousand Faces' (1949):﻿

'The figure of the tyrant-monster is known to the mythologies, folk traditions, legends, and even nightmares, of the world; and his characteristics are everywhere essentially the same. He is the hoarder of the general benefit. He is the monster avid for the greedy rights of "my and mine." The havoc wrought by him is described in mythology and fairy tale as being universal throughout his domain... The inflated ego of the tyrant is a curse to himself and his world—no matter how his affairs may seem to prosper. Self-terrorized, fear-haunted, alert at every hand to meet and battle back the anticipated aggressions of his environment, which are primarily the reflections of the uncontrollable impulses to acquisition within himself, the giant of self-achieved independence is the world's messenger of disaster, even though, in his mind, he may entertain himself with humane intentions. Wherever he sets his hand there is a cry (if not from the housetops, then- more miserably—within every heart): a cry for the redeeming hero, the carrier of the shining blade, whose blow, whose touch, whose existence, will liberate the land'.

Yes I know that Campbell's work is problematic in many ways, but there's something to think about in this descrition of a type even if we have to be our own collective redeeming hero rather than waiting for a knight in shining armour to save us... And on the subject of our collective potential, here some pictures from last month's protests in London.
Donald Trump's visit saw one of the largest week day demonstrations in living memory on Friday 13th July 2018. In fact there were two major demos over the course of the day, the second and largest featuring as many as 250,000 people marching to Trafalgar Square.

The statue of liberty in Trafalgar Square: 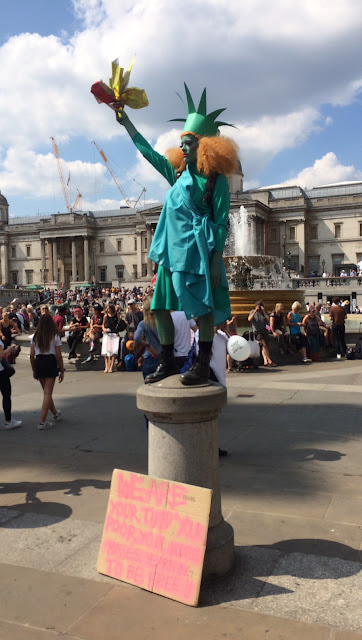 Women dressed as characters from the Handmaid’s Tale with a sign declaring ‘Gilead steals our babies too’ alluding to the caging of children of migrants caught crossing the Mexican border: 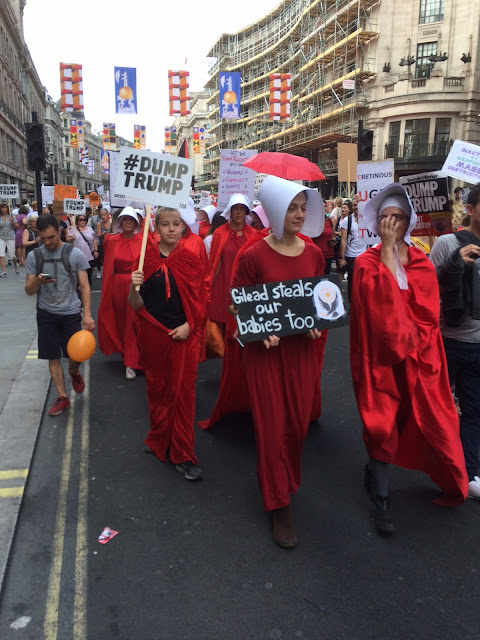 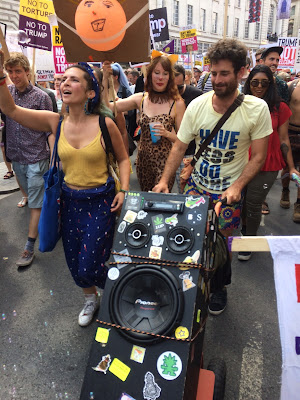 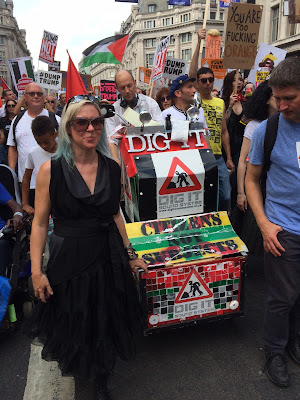 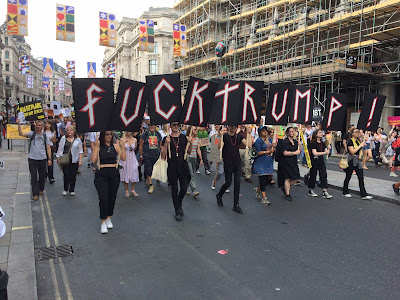 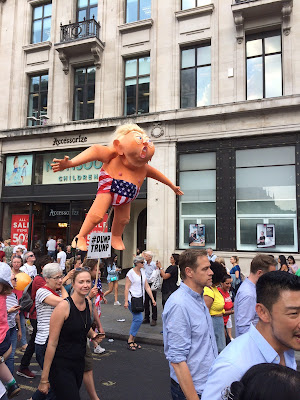 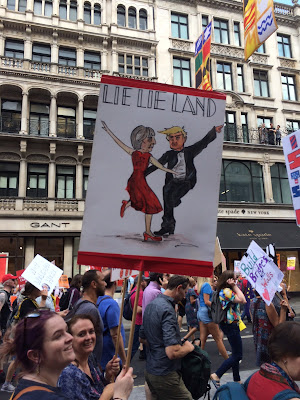 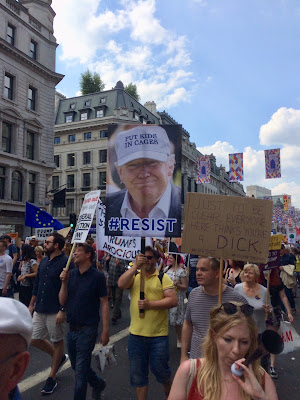 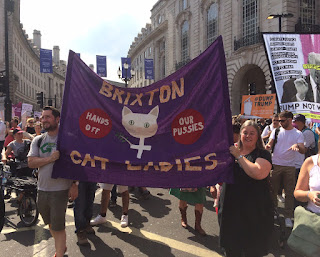 The next day a far right 'welcome Trump to London' march from the US Embassy attracted an embarrassing turn out of less than 200. But it was followed by a Free Tommy Robinson demo in central London that included activists from the UK Independence Party, PEGIDA (Germany), Breitbart, Generation Identity, the Swedish Democrats (SD) and France’s Rassemblement National (formerly the Front National), among many others. Figures associated with Trump such as his former strategist Steve Bannon have supported Robinson (former leader of the English Defence League), indicating a dangerous convergence between elements close to the White House and the previously marginal global far right.


In size, this was a smaller protest than the Free Tommy demo in London a month before which ended in clashes with police (maybe 5000 compared with 15,000). The counter demo was also more effective, including an Anti Fascist Network mobilisation (perhaps 3000 anti-fascists out on the day after the 250,000 anti-Trump protest - compared with a few hundred the month before). Still nothing to be complacent about, even if the immediate UK far right grievance has now been resolved with Robinson being released from prison. Globally the far right have been emboldened by Trump's success and believe that history is swinging their way. Last time some of their Tyrant Monsters achieved power it did not end well.