Alain Badiou's latest book to be translated into English is 'The Rebirth of History: Times of Riots and Uprisings' (published by Verso Books, 2012).

Essentially it is a reflection on the popular movements that have erupted over the past couple of years, in particular those sometimes referred to as the 'Arab Spring'. For Badiou, this amounts to the start of nothing less than a rising up of what he terms 'the inexistent':

'Let us call…people, who are present in the world but absent from its meaning and decisions about its future, the inexistent of the world. We shall then say that a change of world is real when an inexistent of the world starts to exist in this same world with maximum intensity. This is exactly what people in the popular rallies in Egypt were saying and are still saying: we used not to exist, but now we exist, and we can determine the history of the country. This subjective fact is endowed with an extraordinary power. The inexistent has arisen. That is why we refer to uprising: people were lying down, submissive; they are getting up, picking themselves up, rising up. This rising is the rising of existence itself: the poor have not become rich; people who were unarmed are not now armed, and so forth. Basically, nothing has changed. What has occurred is restitution of the existence of the inexistent, conditional upon what I call an event'. 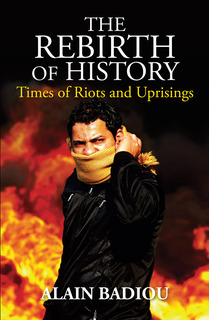 The fact that these movements have coalesced around physical locations - most famously Tahrir Square in Cairo - is no coincidence. For Badiou, any radical idea has to be 'localized' to find meaningful expression, even if  it must ultimately move beyond the limits of the local: 'in times of historical riot the masses create sites of unity and presence. In such a site the massive event is exhibited, exists, in a universal address. A political event occurring everywhere is something that does not exist. The site is the thing whereby the Idea, still fluid, encounters popular genericity. A non-localized Idea is impotent; a site without an Idea is merely an immediate riot – a nihilistic spurt'.

Within these sites, Badiou identifies 'a movement communism' in action:  '"Communism" means here: the creation in common of the collective destiny. This 'common' has two particular features. Firstly, it is generic, representative in a site of humanity as a whole. In this site there is to be found every variety of person of whom a people is composed; every speech is listened to, every proposal examined, and every difficulty dealt with for what it is. Secondly, it overcomes all the major contradictions that the state claims it alone can manage, without ever transcending them: between intellectuals and manual workers, men and women, poor and rich, Muslim and Copts, people from the provinces and people from the capital, and so on. Thousands of new possibilities arise in connnection with these contradictions at every instant, to which the state - any state - is utterly blind. We see young female doctors from the provinces care for the wounded, sleeping among a circle of fierce young men... We see everyone talking to neighbours they do not know. We read a thousand placards where each person's life joins in the History of all, without any hiatus. The set of these situations, these inventions, constitutes movement communism. For two centuries now the sole political problem has been this: How are we to make the inventions of movement communism endure?'

The difficulty is that the 'Instensification' associated with such moments of 'movement communism' is inherently difficult to sustain for long periods: 'During a massive popular uprising, a general subjective intensification, a violent passion for the True occurs which Kant had already identified at the time of the French Revolution under the name of enthusiasm. This intensification is general because it is an intensification and radicalization of statements, taking of sides and forms of action as well as the creation of an intense time (people are in the breach all day long, night no longer exists, people do not feel tired even though they are washed-up, and so on). Intensification explains the rapid exhaustion of this kind of moment.. it explains why at the end there are only scant detachments in the squares on the strike and occupation pickets, on the barricades (but it is they who will be the vector of the organized moment should it arrive). This is because such a state of collective creative exaltation cannot become chronic. It certainly creates something eternal, in the form of an active correspondence, whose power is dictatorial, between the universality of the Idea and the singular detail of the site and circumstances. But it is not itself eternal. Nevertheless, this intensity is going to carry on unfolding long after the event that gave rise to it has itself faded. Even when a majority of people revert to ordinary existence, they leave behind them an Energy that is subsequently going to be seized on and organized'.

There's lots of food for thought here. I am sceptical of Badiou's wider historical political perspective, in particular his ongoing Maoist reverence for the Chinese cultural revolution as some kind of model of potential emancipation (instead of the brutal faction fight that I would regard it as). The ghost of leninism haunts his concern for the minority who must, in his view, carry forward the movement when the period of 'Contraction' follows the exhaustion of 'Intensification'.

I think he is right that in the heat of intense movements, social contradictions can be challenged and partly overcome, though I think it is important to recognise that they don't disappear overnight- witness the sexual assaults in Tahrir Square. My own observations of the Occupy movement is that class  (not to mention gender and race) privilege still asserts itself in who gets to speak, and that when movements contract it is not necessarily the most radical minority that remains - the 'Energy' Badiou rightly identifies can be seized on by aspiring politicians and wannabe movement professionals.

But I do think the dilemma of sustaining movements after an initial period of enthusiasm is a real one. Models of revolution or even of a future society which imagine life as a permanent festival of never-ending passionate creativity neglect the human needs to relax, sleep, look after children and animals, and sometimes do boring tasks because somebody's got to do them. While History is Made at Night has championed the politics of festivity, we also have to recognise that on its own it's not a sufficient basis for a human community. Everyone knows that sleepless nights of hedonism have to be balanced with recuperation to prevent burn out and breakdown, similarly in radical politics there has to be more than the search for the intense buzz of riots, uprisings, strikes and occupations. By their nature these cannot be permanent, and it can be demoralising to return to everyday life afterwards. But like a great party, something always remains to sustain and inspire us through the mundane but essential task of building and sustaining human relationships (including political and social movements) in difficult circumstances.
Posted by A2 at 5:30 am

Glad you liked the book, my take on it in Socialist Review is here: http://bit.ly/rebirthofhistory

(1) I share your suspicions of AB's Maoism but it should be noted that he readily admits the Cultural Revolution was a brutal faction fight. But it was (equally obviously) much more than that - it brought the country to the brink of civil war. AB's argument (which I don't entirely buy) was that the faction fight *also* opened up a space for a genuine popular revolutionary challenge to the "capitalist road" taken by Deng etc.

(2) The problem you identify as "Leninism" is a much broader one that's faced by *any* revolutionary minority. For instance, anarchists also take part in "vanguard" projects where a minority acts directly in the name of the masses, eg Occupy's declaration that "we are the 99%".