Two front covers from The Sun thirty years apart. The first from 1981 during riots, an image of police behind riot shields in Liverpool 8 and the headlne 'To think this is England' (note also bottom of the page 'Fury in the Ghetto'): 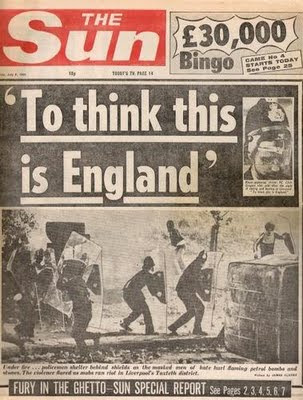 The second from last week's riots declaring 'England is Sick' (note bottom of the page 'Anarchy in the UK'): 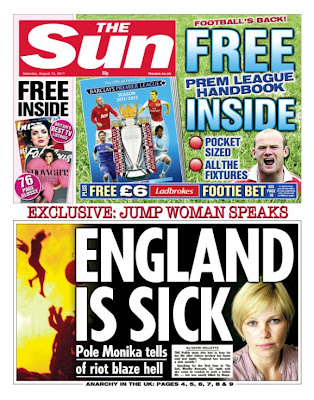 The similarities are obvious, a pervading sense of a post-colonial melancholia (Gilroy), dreaming of some imagined homogenous England free of social conflict that never existed. The choice of England as the frame of reference rather than the UK was particularly significant in 1981 since elsewhere in the disunited Kingdom - in the north of Ireland - scenes of rioting and urban violence had been commonplace for more than 10 years. The implicit assumption was that the 'heartland' should be kept untainted while its forces unleashed water cannons, CS gas, plastic bullets and indeed live ammunition in Derry and Belfast.

If the imagined English rose garden is an acardia, any disruption must be borne by foreign bodies. There is a direct line from Margaret Thatcher's infamous 1978 comments about being 'swamped by an alien culture' to royalist historian David Starkey's complaint this week about the riots being partially the result of white youths 'becoming black'. Inevitably, others have specifically pointed the finger at black music, with Paul Routledge in the Daily Mirror blaming 'the pernicious culture of hatred around rap music, which glorifies violence and loathing of authority (especially the police but including parents), exalts trashy materialism and raves about drugs'.

But there have been changes. The woman on the front page of the Sun in 2011 is a Polish migrant rescued from a burning building in Croydon. England is more diverse than ever, and the dream/nightmare of an all-white Anglo-Saxon nation has receded into the past. Even the fascists like the BNP have stopped publically talking about forced repatriation and have opted instead for positioning themselves as a pressure group for white ethnicity - a begrudging acceptance, whether they admit it or not, of multicultural reality. Darcus Howe saw the 1981 riots as one factor leading to an 'ease of presence' for black people. Well it hasn't always been easy, but up until the 1970s, a significant proportion of white people believed that it was both desirable and possible to 'send 'em all back'. That England is thankfully dead, however much racism continues to exist in various forms.

Still the Polish woman leaping from her flat, the Asian families mourning those killed in Birmingham, the black women at my work complaining about the unruly youth, also pose a problem for any future 'left' or 'radical' movement. The problem is not so much how to overcome cultural barriers but the difference between the rage of those who feel they have nothing to lose, and other working class people who feel - and sometimes are - threatened by this anger. A working class consituency of all ethnicities that can be mobilised by papers like The Sun behind calls for more police and harsher sentences. A New England where overt official racism is marginalised, but marginalised young people - and especially young black people - have a tougher time than ever.

(best thing on musical aspects of the riots so far is Dan Hancox's article in The Guardian, Rap responds to the riots: 'They have to take us seriously')