BP: your party's over 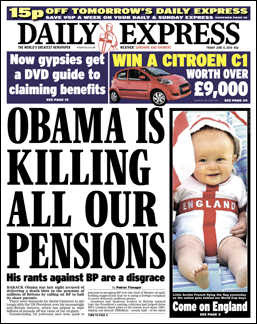 Is there a more obscene media spectacle at the moment than British newspapers like the Daily Express whipping up people to rally round BP (see for instance this front cover from June 11th)?. On the one hand, Obama is criticised for calling them British Petroleum when they have rebranded themselves as plain old multinational BP (British Polluters?); on the other we are told that the British Government should do more to defend them because of their importance to the British economy. It may be true that a collapse in BP's share price will hit pension funds, but that just highlights the absurdity of older people's incomes being at the mercy of the market lottery. Of course other oil companies are just as bad, and indeed governments all over the world, including Obama's, are deeply involved in their activities.
But what about BP? Never mind the unfolding environmental disaster in the Gulf of Mexico, 11 workers died in the Deepwater Horizon explosion on April 20th - something that every report on this should be mentioning, but which seems to frequently be 'forgotten'. Likewise 16 workers died in April 2009 when the helicopter carrying them from BP's Miller field crashed into the North Sea. And 15 people died in the infamous March 2005 BP Texas City refinery catastrophe.
Shortly before the Gulf of Mexico explosion, there was a protest against another BP operation - the strip mining of a huge area of the Candadian wilderness in Alberta to extract oil. The International Day of Action on the Canadian Tar Sands on 10th April was marked in London with a 'Party at the Pumps' at Shepherds Bush Green BP Petrol Station. Using a tactic developed in the 1990s Reclaim the Streets parties to outwit the police, people gathered at Oxford Circus tube station, most of them unaware of the location of the protest. They followed a few people with flags on to a train, who signalled with a whistle blast at Shepherds Bush station that it was time to get off. Meanwhile an advance party had occupied the petrol station forecourt.
More than a hundred of people took part in the four hour long 'Party at the Pumps', dancing to live music from the Rhythms of Resistance samba band, the Green Kite Midnight ceilidh band and the Bicycology sound system 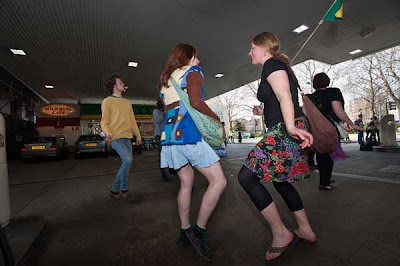 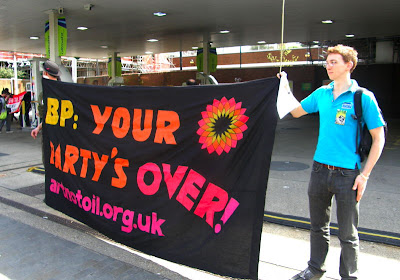 photos © Peter Marshall 2010; loads more at his My London Diary site
Meanwhile, in Casanare, Colombia, workers have been occupying a BP plant in a wages dispute. According to the Colombia Solidarity Campaign (6 June 2010):

'There has been an upsurge in workers and community protests against BP in Casanare since the beginning of 2010. Workers at the Tauramena Central Processing Facility (CPF) starting 22 January went in strike supported by USO, the National Oil Workers Union of Colombia. On 15 February riot police brutally attacked the picket line, sending three workers to hospital. Demonstrations and popular assemblies in support of the stoppage took place in Tauramena and surrounding villages from February onwards. The USO union and many different community sectors came together to form the Movement for the Dignity of Casanare. The strike ended after 30 days when BP promised talks...

On 21 May workers involved in construction operations in the Tauramena installation entered into occupation demanding: a wage increase; the establishment a wage scale; due process in disciplinary decisions; and labour guarantees for the workers. On 2 June army forces entered the plant and at time of writing are harassing the workers, who stay overnight chaining themselves to plant equipment so that they cannot be dislodged'.

In the past activists opposing BP in Colombia, whether on environmental or workplace issues, have been killed by right wing death squads.

BP started out as the Anglo-Persian Oil Company (APOC) in 1909, after oil was discovered in Iran. It was renamed the Anglo-Iranian Oil Company (AIOC) in 1935 with the British Government taking a controlling interest, and the British Petroleum Company in 1954. It notoriously played a role in the 1953 military coup which overthrew the Mohammed Mossadegh as Prime Minister after his government voted to nationalise AIOC. As Stephen Kinzer, author of All the Shah’s Men: An American Coup and the Roots of Middle East Terror, summarised in a recent interview : 'the oil that fueled England all during the 1920s and '30s and ’40s all came from Iran.... Every factory in England, every car, every truck, every taxi was running on oil from Iran. The Royal Navy, which was projecting British power all over the world, was fueled a hundred percent by oil from Iran'.
Posted by A2 at 8:07 am

Adam Curtis has done an interesting post at his blog about the history of BP and its role in Iran and Rhodesia.
http://www.bbc.co.uk/blogs/adamcurtis/2010/06/post.html