With record shop Sister Ray in London's Berwick Street going into administration (and inevitably a facebook group set up to save it), the usual questions are being asked about the death of vinyl and its retailers. Must admit I haven't bought any vinyl for a while, my decks are actually gathering dust in the cellar. I would like to be able to digitise the huge stack of records I have secreted in various cupboards, rather than buy any more - although I am often tempted to buy old disco records just for the sleeves or even just the design of the record labels. 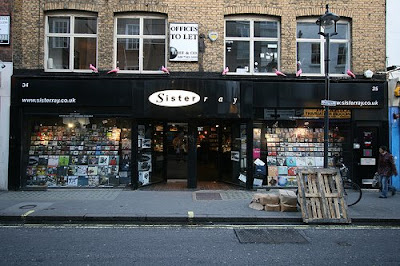 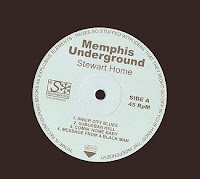 'I found a dozen collectable punk singles in a charity shop. I paid one pound twenty for them, and sold them for three hundred quid. I made the money in Berwick Street and half of it stayed there, because I spent it on rare groove. It was a potlatch, deliberate waste, what, after Bataille, I might call solar economics if I didn't find this theorist's attraction to the sublime aesthetics of tragedy and sacrifice so unpalatable. It wasn't as if I'd actually listen to the original vinyl pressings I'd bought. I didn't need to, since I already possessed what I'd purchased on cheap CD reissues. Besides, playing the records might well reduce their value. Certainly overplaying them, so that they ended up scratched and worn, would lessen their financial worth...

Analogue and digital are two quite different things. A vinyl record wears away: every time you listen to it, you never hear quite the same thing. Flaws are gradually introduced and these increase with repeated plays. Whereas a CD either works or it doesn't. If a CD plays you always hear the same thing. With CDs change is absolute. A damaged CD is useless and worthless. What I coveted was obsolescence as the ultimate luxury product, so my distaste for ruined CDs is not quite as odd as it may at first appear. Vinyl records possessed me and the only way I could undo this hoodoo voodoo was to purchase the items by which I was enchanted. It was a fatal strat­egy. The revenge of the object became the object of my revenge. A dialectic of metaphysics with Jean Baudril­lard and Rudy Ray Moore battling it out at an all night blues party saturated with gut-bucket funk. It could have been worse, since unlike some people I know, I'm not into the eight track cartridge- a fetish that greatly restricts the choice of music available to you'.

For me going to record shops is as much about getting a sense of what's going on in different music scenes as actually purchasing produce - picking up zines and flyers, hearing what people are playing and seeing what's on the racks. So I guess I'm part of the demographic that doesn't buy records and then complains when record shop disappear!

The loss of a single record shop is no big deal, but it is important that there are zones of the city where you can wander in search of lost treasure - which in my case means books and music. You could plot my serial obsessions by mapping the routes I have taken across London at different times in search of particular zines or singles. Berwick Street, with its various record shops, has often featured on these itineries - for instance at one time there was a good techno shop where I used to buy datacide and nearby Vexed Generation, with its mid-1990s anti-Criminal Justice Act clothing. Whatever happens to Sister Ray, it would be a shame if Berwick Street just ended up full of generic bars and coffee shops like much of Soho.
Sister Ray photo from jereoen020 at flickr . Update 8 October 2008: there's a thread on the decline of Berwick Street over at dissensus - noting that Reckless Records closed its two shops there last year. Sister Ray remains open for now, but seems fairly certain to close - though whether it goes bankrupt or manages to move to an area with lower rents remains to be seen.
Posted by Transpontine at 8:21 pm

That's a damn shame, Sister Ray is a fine record shop. Wouldn't it be tragic if we had to rely on HMV, Zavvi and Fopp for music?

Independents like Sister Ray might be a dying breed but we should hook em up to an iron lung and prolong the agony for as long as possible.

If you're ever up north, check out the northern quarter (essentially either side of Oldham Street)in Manchester for a density of new and secondhand record shops comparable to Soho. There are even a couple of bookshops!

Would certainly be a shame if Berwick St became just another road of random shops. Haven't been to Mancester for tooooo long - sad to confess but these days Kings Cross seems too far north - but must make it some time.

You Londoners crack me up!

No, seriously, if you ever make it up here, let me know and I'll take you out into the suburbs for the real crate-diggers emporia.

You can get a preview in a recent piece - the vinyl countdown (geddit!?!?) - on the blog, which is about the problems Manchester secondhand shops have at the moment. You might find it interesting ...

And I am loving those Eldridge Cleaver pants!