Thanks to Google news and other archive searches it is possible to date reasonably accurately when words came to be widely used, at least in printed form. I believe the term discotheque (which literally means 'record library') to describe a nightclub where people danced to records dates back in French to World War 2. Several online sources mention that a club called La Discothèque opened on the rue Huchette in Paris in 1941.

But it seems to have taken another twenty years for the term to catch on in English. The
first newspaper references I have come across date to 1963-5,  with a number of items in The Times (London) referring to The Discotheque Club in Soho.

The paper reported on 18 October 1963 on the trial of Norbet Rondel, a former heavy for landlord Peter Rachman, who was accused of 'demanding menaces from Sergiusz Paplinski, proprietor of the 150 Club at Earls Court Road'. The court heard that Rondel had been a doorman at the Discotheque Club run by another associate of Rachman, Raymond Nash.

The following year the club was named in Parliament as the 'Soho nerve centre' of the 'purple heart racket' (Times, 10 June 1964), and a quote in the article suggests that the Discotheque Club was already open by 1961 .  In January 1965, five people appeared in court charged under the new Drugs (Prevention of Misuse) Act 1964 after being arrested in a police raid at the club in Wardour Street ('Youths and girls on drug charges', Times, 26 January 1965).

Rondel died in 2009,  and I have written a bit more about La Discotheque Club here (incidentally Marc Bolan worked there as a cloakroom attendant in his early 'Mark the Mod' days). As well as being sometimes credited with being London's first disco, it seems to have acted as a bridge for the word itself becoming established in English. Before long there were other clubs with similar names, and the word was being used generically for a place where records were played to dance to. By 1966 there was a Discotheque club in Hythe Bridge Street, Oxford, where in September a crowd of youths fought with police (Times, 12 September 1966). The Times also reported that a plan had been approved at St Mary's church, Woolwich: 'In the crypt a discotheque will be established as  centre for youth work' (24 August 1966).

Another route into the printed English language seems to have been via fashion writers at Associated Press (AP) at around the same time.  Elsie Beall, an AP Fashion Writer reporting on a New York Couture Group event, made the first reference I have found to discotheque in an American paper in July 1964 to describe a dress: 'There aren't many short evening dresses around for fall except for the discotheque - pronounced dis-co-tek, in case you are having trouble with that world as we did at first hearing. It is just a slip of a dress, almost always black and flaring, or ruffling out at the high knee, with plenty of whirl for doing those dances where the feet stay in one spot while the rest of the body twists in all direction. Discotheque, it seems, is the name of the little Paris dance halls where the whole thing started'  (Ocala Star-Banner 17 July 1964 - like other AP reports this would have been syndicated and probably printed in many local and regional papers, but not all of them are online).

On the same day an AP report of the same event printed in the Nashua Telegraph stated: 'The faithful and femme fatale black dress or suit will be on the scene next fall like a million shadows. It will be sleek and chic, dressed up with white for the day, but bare and naughty at night for wearing to the discotheque'

The same writer makes the first published use I have found of the word 'discotheque jockey' in the context of the influence of French 'Ye Ye Styles' in New York:  'YeYe, the French version of youth's rebellion against the stodginess of old folks over 25, is now going strong in the USA. Born in Paris as a hip response to songs with a beat, YeYe came to be a term for audacious styles worn by young misses, then grew in meaning to encompass the current mood of youth itself - lively and uninhibited. Ask a New York den what is YeYe in town, for instance, and she undoubtedly will describe a popular hamburger joint with juke box movies; or a discotheque jockey at one of the fancier hotels who keeps crowds gyrating frenetically by blasting not one but three jump-and-wiggle records at once' (Eugene Register Guard, 23 October 1964)

Associated Press also mentioned the word in the surprizing context of a report about a party at Windsor Castle with 16 year old Prince Charles as MC!:  'Like it was a rave, man... the first Beat Ball in the history of the British royalty... The castle's crimson drawing room was turned into a discotheque - a nightclub which provides only recorded music for dancing'. 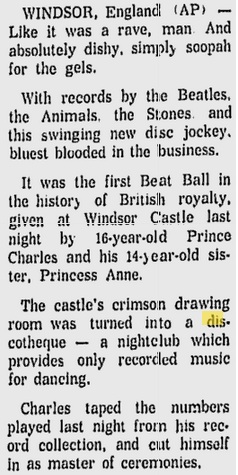 After writing this I have come across a recent Oxford University Press article covering similar territory - and coming to similar conclusions. They also note the first printed references in 1964 to the abbreviated version 'disco' to refer to both the dress and the nightclub.