On Copyright and Capital

Well I was going to join today's 'internet strike' and close down the site for the day in solidarity with the movement against SOPA  - the proposed US Stop Online Piracy Act with its repressive measures against file sharing. Maybe I would even leave a cool message like this one from Libcom: 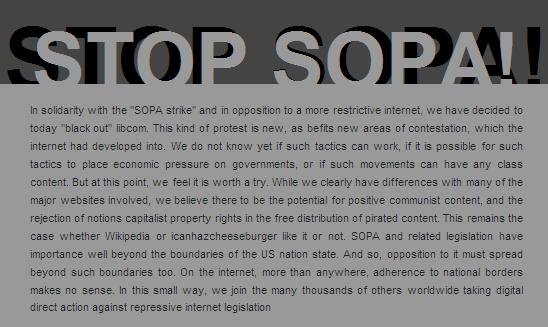 But I couldn't work out how to do it on Blogger, so instead I'm just going to write a little about it. One of the features of the 'enterntainment industry' campaign to reinforce copyright on the internet and elsewhere is the obligatory wheeling out of musicians to argue that they need punitive laws like SOPA to protect their livelihood. It may be true that in some cases the enforcement of copyright means that musicians earn more money, and like everybody else they have to make a living. But copyright laws aren't there to protect musicians/artists/cultural workers, they are there to protect the interest of property owners - record companies rather than musicians. The copyright laws also work against musicians, as many discover when they realize that their contracts mean that 'their' work actually belongs to the company.

I was reminded of this when I came across this story today from Zimbabwe:

'Gospel musician Kudzi Nyakudya was last Friday arrested after he was found selling 200 pirated CDs of his own music. The diminutive Kuwadzana-based gospel artiste spent the weekend in police cells and was only released yesterday after his recording company, Diamond Recording Studios, withdrew the charges. Selling pirated CDs is illegal as it contravenes the Copyright Act, which makes it a criminal offence to duplicate or photocopy CDs, books and any form of intellectual property without permission. In an interview yesterday, Kudzi confirmed the arrest, but said his actions were largely influenced by the recording company’s weak distribution strategies... “Look, I have been getting a raw deal from the company (Diamond Studios), and I just could not starve, so I ended up duplicating my own CDs for resale,” he said' (Nehanda Radio, 17 January 2012).

For the musician, what starts out as free activity can be turned into labour for the record companies in which the musician becomes a 'cultural proletarian' whose 'product is from the first subordinated to capital and intended only to utilize capital' - or to give the full Marx quote:

'The same sort of work can be ‘productive’ or ‘unproductive’. Milton for instance, ‘who did the Paradise Lost for £5’, was an ‘unproductive’ worker. The writer, however, who turns out factory hack-work for his book-seller, is a ‘productive worker’. Milton produced Paradise Lost for the same reason as that which makes the silk-worm produce silk. It was an activity wholly natural to him. He later sold the product for £5. But the cultural proletarian in Leipzig who churns out books (such as compendia of economics, for instance) under the direction of his book-dealer, is a ‘productive worker’; for his product is from the first subordinated to capital and intended only to utilize capital.  A singer who sells her singing on her own initiative is an ‘unproductive worker’.  But if the same singer is engaged by an entrepreneur who lets her sing in order to make money for him, then she is a ‘productive worker’: for then  she produces capital’ (Marx, Theories of Surplus Value, Vol. 1).

(quote via John Hutnyk, whose lectures on Capital I am currently attending; for a few more Marx and Engels quotes on music see this article by Mark Lindley - there aren't that many)

re: square bracket comment on productivity, I admit I am one uses the term productive, although not sure if in the fetishistic way you suggest.

My argument, aphorism ,that i boringly trot out ad infinitum, is that everybody wants to be productive but not everyone wants to be exploited.

but I guess I am using an Arendtian conception that something productive is work, has a finished product, as opposed to labour - the never finished alientation.

I find this interesting with regards to Marx's use of an artistic work as unproductive as surely marx's concept of alienated labour was precisely that the division of labour in the factory meant that man was alienated from his product (ok having to sell it on the market too).

(I use my above aphorism against arguments of the long term unemployed as somehow feckless, and moving on to the fact that if you ain't productive it is for reasons to do with emotional governance (as opposed to the structural governance of employment cycles), a morphogenetic argument based on the understanding of emotion as that the drives us to action (e - motion), rather than anything based on an unknowlable human essence)