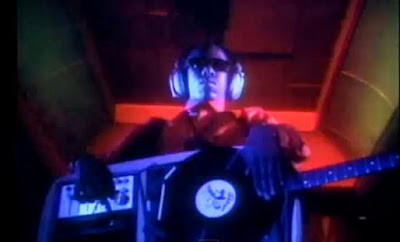 Tone Loc's 1989 Funky Cold Medina is both an old skool rap pop classic and a slightly dubious paean to slipping an aphrodisiac into women's drinks (and indeed dog bowls).

What I love about the video is this great fantasy instrument combining a record deck and a guitar, making visible hip hop's innovation in playing vinyl as an instrument. In this song in particular it is bits of guitar rock that are being played, with samples including bits of "Honky Tonk Women" by The Rolling Stones, "Hot Blooded" by Foreigner and "Christine Sixteen" by Kiss (as well as some drum sounds from Funkadelic's "Get off your Ass and Jam").

Of course the instrument wouldn't really work - there aren't any guitar strings and you couldn't scratch without gravity pulling the stylus down - but hey, I would still love to have one to pose around the house with.
Posted by Transpontine at 7:15 am