March for the Alternative in London

Some reflections on last Saturday's anti-cuts March for the Alternative in London (March 26th)... I knew it really was going to be a big one from the moment I left home. The fact of the demonstration was everywhere, graffiti, stickers, a bus full of people talking about the demo. I knew it was going to be bigger still when I got to Kennington Park to join the South London feeder demonstration (see pictures here). This was organised independently of the main demonstration, and the police had contacted the organisers in the week to urge them to cancel it, claiming it would be a tiny failure. In fact by the time we reached Westminster Bridge there were at least two thousand people on it, and I was already noticing that it wasn't just the usual political and union activists - there was my daughter's music teacher, some random people from work, even the guy who sits drinking at the corner of my road. 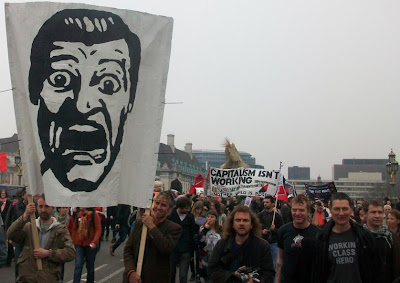 We crossed Westminster Bridge to the sounds of Get Up, Stand Up (Bob Marley version) on a bicycle sound system. I assumed we must have been near the start of the march because the crowd stretched as far back along the Embankment as I could see. But then I heard that the front of the demonstration had already reached Hyde Park.

The size of the crowd has been estimated as half a million, significant for a number of reasons not least of which is that this big a demonstration is almost beyond the need for representation. A small protest is to an extent dependent on the media to communicate its intent to the wider public, but in this case a good proportion of the public were actually there or would know somebody else who was. Half a million is more than one per cent of the adult population of Britain, and everyone who was there can probably think of 4 or 5 people who said they intended to go but couldn't because of family commitments, illness or other reasons.

The core fact of the demonstration - that a huge number of people are opposed to the cuts and are beginning to take action against them - was viscerally felt by everybody who was there, not to mention the many other people in central London who saw it. And many other people who weren't there would have heard about if first hand from somebody who was. In this context the fact that some of the press and TV coverage may not have accurately reported what happened is arguably less significant.

'Millionaire Boys Club' - 'Tax is for the little people': 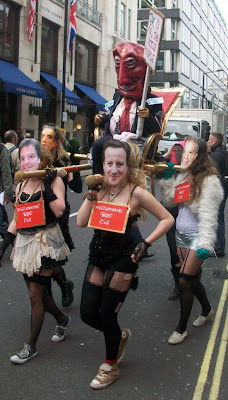 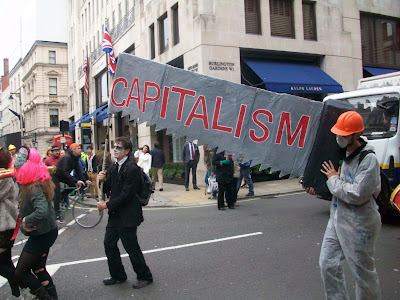 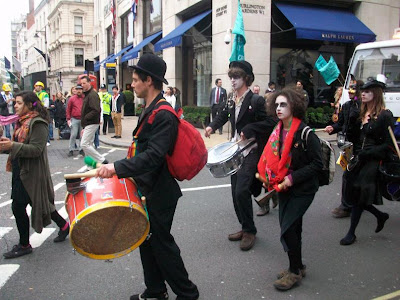 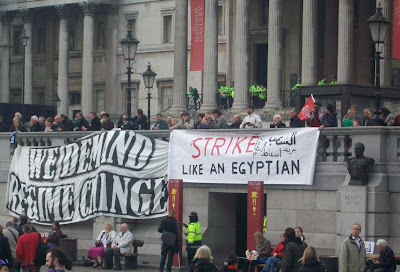 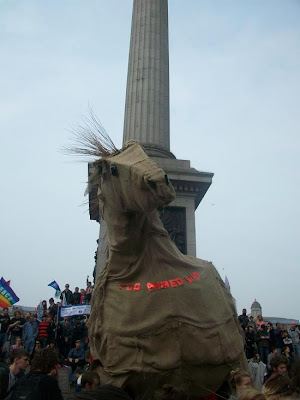 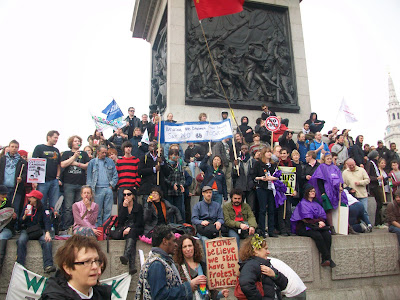 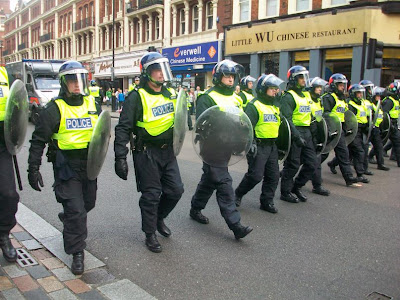 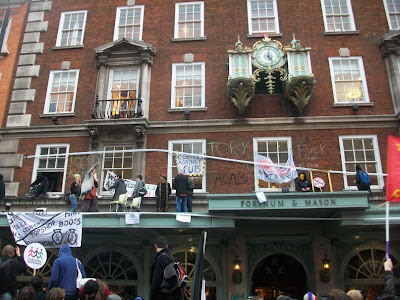 Much of the commentary since the march has focused on a supposed distinction between the peaceful main demonstration, the non-violent direct action of UK Uncut (including the occupation of posh food store, Fortnum and Masons in Piccadilly) and riotous 'Black Bloc' anarchists. Of course a great diversity of tactics was in evidence and not everybody agreed with everything that was going on , but things were much more fluid than a categorisation of the crowd into three distinct blocs would suggest.
There were thousands, maybe even tens of thousands of people, who headed off the main march route into the West End with a sense of wanting to take things a stage further than just a rally in Hyde Park. All round Mayfair, Oxford Street, Piccadilly and Trafalgar Square there were people in the streets. This crowd was much more diverse than just young people in black, all kinds of folk were hanging around caught up in the excitement. A sense too that while not everybody was up for it, many were glad that people younger, fitter and with less to lose than them were acting out the rage they felt.
The actual violence was fairly sporadic and limited, as was the window breaking - what was much more widespread was a diffuse sense of wanting to go beyond business as usual.
Sound Systems
Lots of sound system action - ranging in sophistication from back packs, via speakers in bike baskets to sophisticated bike trailers. Thought I saw Rinky Dink Sound System, one of the original cycle powered rigs from Reclaim the Streets in the 1990s. 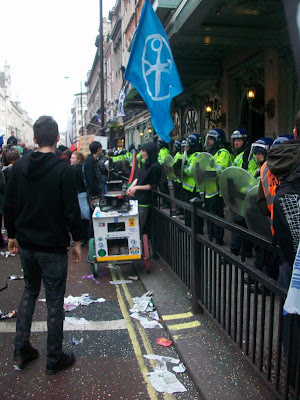 There was a sound system next to the line of riot police outside the occupied Fortnum and Mason's (above), and while I was there another one cycled past seemingly called the Tolpuddle 6 sound system, complete with pictures of the Dorset agricultural workers transported to Australia for starting a union in the 1830s. They were playing Got to be Real by Cheryl Lynn, great 70s disco classic and indicative of the diverse music being played on the day. I heard drum & bass, dancehall, reggae, punk, techno and dubstep - including this guy doing human beatbox wobbly bass dubstep in Trafalgar Square: 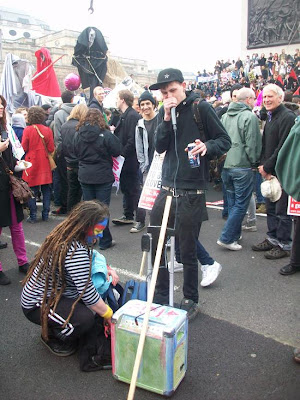 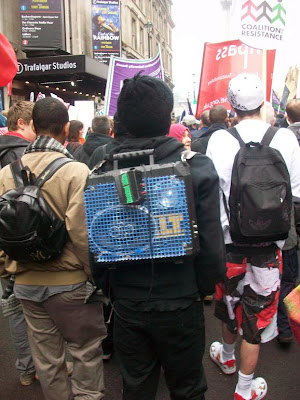 Sound system in a push chair: 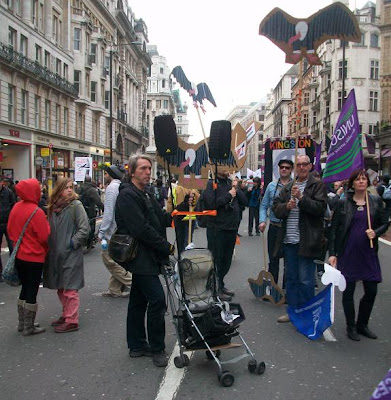 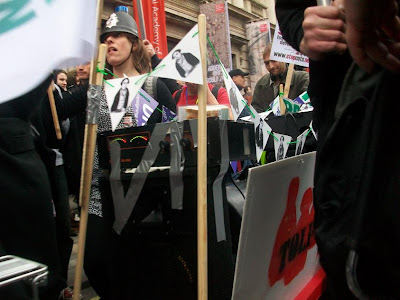 Also heard reports that at Oxford Circus the crowd chanted the Star Wars Imperial Stormtroopers theme at police - as widely used on the student protests before Christmas.
Posted by A2 at 8:37 am

The Swedish government was responsible for the most iron ore the Nazis received. Kiruna-Gällivare ore fields in Northern Sweden were all important to Nazi Germany.

These massive deliveries of iron ore and military facilities from Sweden to Nazi Germany lengthened World War II. Casualties of the war have been estimated at 20 million killed in Europe. How many of them died due to Sweden's material support to Nazi Germany, is not known.


The Swedish drinking toast (skal) has a rather macabre background; it originally meant 'skull'. The word has come down from a custom practiced by the warlike and terrorist Vikings who used the dried-out skulls of their enemies as drinking mugs, with the evident advantage that the mug held a large quantity of mead and could be easily replaced.

The Viking raids are remembered: Spanish-speaking mothers warn their children that if they do not behave, the Norwegian (el noruego) will carry them off.