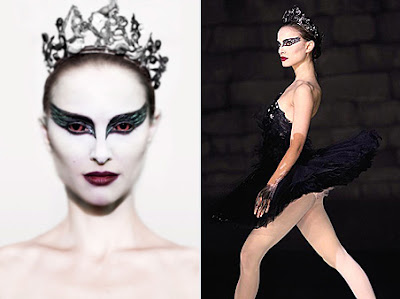 Enjoyed Black Swan, a whole movie about dancing - what's not to like? If you've been living in a cave for the last month you might need to be told that it stars Natalie Portman as a ballet dancer struggling with her dark side as she prepares for the dual role of white swan/black swan in Swan Lake. Cue sex, drugs, blood and madness. All this and great eye make up!

It also has one of the best club scenes I've seen in a movie for a while, conveying a sense of messy, druggy dissociative intimacy on a dancefloor. It was apparently filmed in the Forum in Manhattan with soundtrack courtesy of The Chemical Brothers.

Weirder than anything in the film is the usual drivel on crazed conspiracy sites where David Icke acolytes ponder how the movie fits in to the supposed global/zionist/illuminati/Hollywood mind control plot. Apparently the movie teaches us to embrace our evil natures and commit ritual sacrifice. I don't dip into this stuff very often, and am not going to link to it, but needless to say much is made of the fact that Natalie Portman is.... shock horror... Jewish. There's a lenghthy obsessive post out there with the hilarious (but they're not joking) title Natalie Portman, Kabbalistic Kitten.
Posted by Transpontine at 7:15 pm