Ari Up, The Slits and Unmediated Female Noises

Sad news about the death this week of Ari Up (Ariane Forster), former lead singer of The Slits. She was only 48, incredibly she was only 14 when she joined the band and only 15 when they set out on the famous White Riot tour with The Clash in 1977. At that time they were quite literally making a sound that had never been heard before and looking like nobody had ever looked before.

As Greil Marcus wrote in Lipstick Traces: a Secret History of the Twentieth Century (describing a bootleg recording of the band):

'Shouting and shrieking, out of guitar flailings the group finds a beat, makes a rhythm, begins to shape it; the rhythm gets away and they chase it down, overtake it, and keep going. Squeaks, squeals, snarls, and whines - unmediated female noises never before heard as pop music - course through the air as the Slits march hand in hand through a storm they themselves have created. It's a performance of joy and revenge, an armed playground chant' (Greil Marcus, Lipstick Traces). 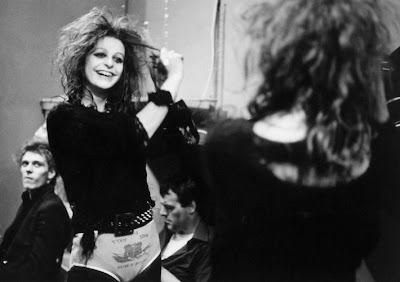 In 1977, Caroline Coon accompanied the band on some of the White Riot tour, taking some great photos like the one above of The Clash's Paul Simonon watching Ari do her hair. She documented it in her under-rated book '1988: The New Wave and Punk Rock Explosion':

'It is what the Slits represent, even at their least provocative, that gets up people's noses... Their earthy arrogance and striking mode of attire - an organised mess of dressed-up undress - causes adults to behave with alarming intolerance. Quite apart from being thrown out of hotels, Ari Up is quite used to being spat at by people who pass her on the street. Being refused service in coffee bars and pubs is another fact of life'.

The book includes a poignant quote from Ari: 'I want to live, and when I'm sixty I want to have green hair and spikey heels. If people hate us its because of our honesty. You have to comb your hair otherwise they think you're a mad loony or the devil. But they are living in the past'. Sadly she didn't make it to sixty, but she will be remembered for a lot longer.
Posted by Transpontine at 8:27 pm