Since Prince fell out with with Warner Brothers in the 1990s he has pursued various unconventional strategies for distributing his prolific output of music, including giving away albums for free with newspapers. 2007's Mother Earth was distributed in the UK with The Mail on Sunday, putting me in in the shameful position of having to buy a copy of this notorious right wing rag. His new album, 20Ten, was given away last weekend with the slightly less objectionable Daily Mirror - at least I didn't have to worry about anybody seeing me. 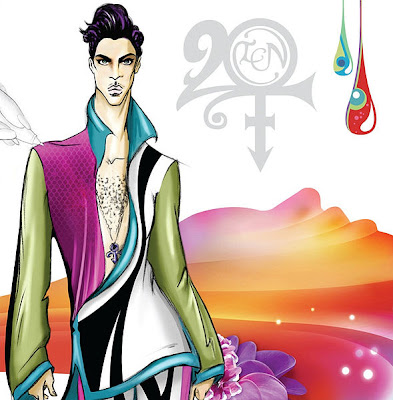 While I am all for free distribution, I can't help thinking that being given away with dubious tabloids somehow devalues the music. And with the rate he churns songs out, quality control does sometimes seem to go out of the window. But 20Ten is actually his best album for years. Musically it's still pretty much the same template as he developed in the 1980s, a mixture of pop, electro-funk and soulful ballads (with Future Soul Song the standout of the latter). Some of these tracks would be widely acclaimed if they had been on one of his albums from that period, I guess now people do tend to take his songwriting/singing/guitar playing talents for granted - or have stopped listening.

This is an album of real songs, with Prince reining in some of his tendency to self-indulgent funk workouts and fillers. There's some space references on Beginning Endlessly, always a hit with me: 'Why should you be satisfied with just heaven and earth? When you look around there's so much more to the Universe'. Best of all, Act of God is a Sign o' the Times style summation of the state of the world, encompassing war and economic crisis:

Dirty fat banker sold a house today.
Sold at auction, wants the family out the way
Kicked them on the street cause they couldn't pay the tax
Call it an act of God...

But, I got news for you, freedom ain't free
They lock you in a cell if you try to be
But the ones who say no make history
Call it an act of God.

Tax dollars build a plane , drop a bomb
Supposedly to keep us all safe from Saddam
Bringing bad news to another woman
Call it an act of God.
Posted by Transpontine at 8:29 am