One Day by David Nicholls is a novel based on the familiar theme of a group of friends growing up (see also Jonathan Coe's The Rotters' Club/The Closed Circle or even Virginia Woolf's Mrs Dalloway), with shifting relationships and values. In this case the premise is to check in on the main characters on a single day a year over a twenty year period from Edinburgh University life in 1988 to.... well, I don't want to spoil the ending.

The day in question, July 15th, is St Swithin's Day, with the author acknowledging that Billy Bragg's song of that title was one influence on the plot ('The polaroids that hold us together / Will surely fade away / Like the love that we spoke of forever/ On St Swithin's day'). 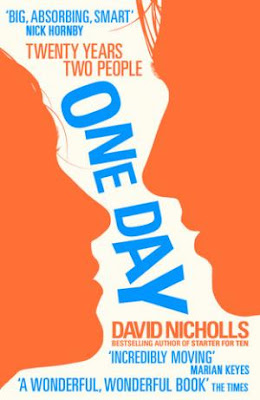 Inevitably there's a 1990s ecstasy/clubbing section, with a nice description of the last moments of a night out at a railway arch in Brixton. Let's just say we've all been there:

'Tara is saying let's go and dance before it wears off, so they all go and stand in the railway arches in a loose group facing the DJ and the lights, and they dance for a while in the dry ice, grinning and nodding and exchanging that strange puckered frown, eyebrows knitted, but the nodding and grinning are less frrom elation now, more from a need for reassurance that they're still having fun, that it isn't all about to end. Dexter wondered if he should take his shirt off, that sometimes helps, but the moment has passed. Someone nearby shouts 'tune' half-heartedly, but no-one's convinced, there are no tunes. The enemy, self-consciousness, is creeping up on them and Gibbsy or Biggsy is first to crack, declaring tht the music is shit and everyone stops dancing immediately as if a spell has been broken' (1993).
Posted by Transpontine at 8:30 am