In the past couple of years there have been several albums aiming in some way to reflect on life in early 21st century London. Think The Bug's London Zoo or Nitin Sawney's London Underground (both 2008) or even, on a more historical tip, Madness's The Liberty of Norton Folgate (2009).

Dusk and Blackdown's Margins Music is very much in that lineage. As Martin Clark/Blackdown told Woofah magazine: 'We pretty much noticed that all the music we liked from the city, from UK garage to jungle/d&b, to dubstep and grime, came from the rougher edges not the safe centre'. With this in mind, the album explores particular sonic territories associated with specific zones of the capital, from the East/North East London grime heartland to 'Croydon, Streatham, Norwood and Norbury: the places where dubstep was born'. But of course margins refers not just to geographical areas, but to socially marginalized people and spaces, 'strange hidden studios, night buses, deserted overland stations, squat parties, council estates, Iranian corner shops, Bollywood tape shops' (Woofah #3, 2008).

Although the album was released in 2008, it feels like a project in progress. Starting out with a series of 12" single releases in the second half of the noughties, followed by the album, then a remix album by Grievous Angel, they are now taking it several steps further with live performance. 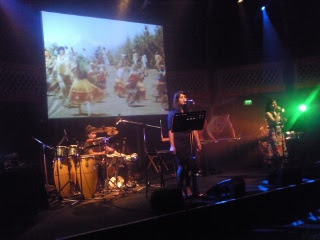 I went along to their first night last Saturday at the Albany in Deptford. Must admit I wasn't quite sure what to expect. I tend to be sceptical of attempts to render electronic music as live performance - sometimes just a guy standing on a stage behind a laptop in which case you think 'why bother?', sometimes a horrendous jazzification whereby perfectly good samples are reproduced by live musicians suggesting a crisis of confidence, as if 'authenticity' requires 'real musicians' noodling away.

But for this show, Dusk and Blackdown got the balance just right. Not cluttering the stage with lots of musos, but foregrounding the live elements that really added something, in this case the voices of Farrah and Japjit, and live percussion from Renu (plus Dusk and Blackdown themeselves and keyboard player Bobbie). Another key ingredient was the visuals masterminded by Jonathan Howells - a mix of old London newsreel (some great shots of women dancing), Bollywood and contemporary urban shots of lots of the capital's postcodes. 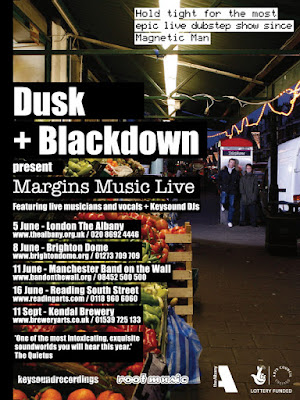 What makes Margins Music particularly ambitious is its recognition of the South Asian musical influence in the great London soundclash. With everything else that is in Dust and Blackdown's mix, this could easily result in a kind of tepid fusionism. But they are sufficiently grounded in London bass and beats (DJing on Rinse FM etc.) to be able to bring in these desi flavours without creating a bland mish mash.

To create a sonic space in a studio in which disparate social, musical and cultural elements are brought into play is one thing. To create a physical space in which people with different backgrounds and experiences come together in a single continuous performance is much harder. Margins Music Live managed to pull this off, with the South Asian themed opening shifting into Trim's grime verbal gymnastics towards the end.

It was a respectable crowd for a first live performance, but a bigger audience and the increased confidence of having a glitch free debut behind them could lift Margins Music Live from really good to another level. So if you get the chance, check this out with gigs this week in Brighton and Manchester and follow ups in Reading and Kendal. Details here.

I went along with John Eden, who beat me to getting his review up.

More photos at Blackdown's blog
Posted by Transpontine at 9:48 pm

You have done a marvellous job by exploring this subject with such an honesty and depth. Thanks for sharing it with us!