1. Can you remember your first experience of dancing?
As a baby, I used to pull myself up using the sofa arm and jig about the Top of the Pops whilst my parents were watching it, but I was too young and I don't remember doing it. I've just cringed at the photographic evidence. At about 3/4, I started ballet lessons. I remember galumphing about, in my pink outfit that made me look like a marchmallow, and waving a scarf around. I loved it, and carried on with the lessons until I was 11 and I realised I would never make it as a ballerina because I have funny knees.
2. What’s the most interesting/significant thing that has happened to you while out dancing?
Probably realising that the person I was with at the time, was an absolutely appalling human being that I needed to get rid of as soon as possible, which I did. Weirdly, it took seeing his reaction to having glowstick juice accidentally being flicked into his eye to make me see this.
3. You. Dancing. The best of times…
I'm torn, on this one. Two occasions come to mind. One would be playing Bikini Kill's 'Rebel Girl' with my friend Laura at our clubnight, Girl Germs. We were thrashing about at the decks and everybody there was jumping around and screaming the words. Awesome. More recently, dancing to 'Y Control' at a Yeah Yeah Yeahs gig before Christmas. I consider it a bit of a theme tune for me, and I always end up crying whilst stomping about to it. Hearing it live was incredible. 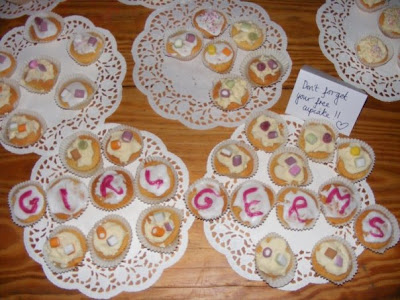 4. You. Dancing. The worst of times…
Probably the same as a lot of women really. Having a letchy man grab hold me whilst I'm just trying to have fun with my friends. One particularly obnoxious fellow hooked his fingers through my belt-loops so that I couldn't escape from him. It was disgusting, and quite frightening while it lasted.

5. Can you give a quick tour of the different dancing scenes/times/places you’ve frequented?
I can't give a very good answer to this question I don't think. I grew up in Bedford, and there was only one place to go out if you were a self-conscious indie kid, and that was The Pad. They played all the indie disco hits and my friends would always end up pulling some boy who wanted to be Julian Casablancas or Connor Oberst. I used to come down to London for gigs a lot before I moved here. I went to see NME darlings, The Others about a million times and made lots of friends through that scene. Looking back the music was terrible, but we had so much fun together. I even met my boyfriend at an Others gig at The Old Blue Last, which is pretty embarrassing! When I moved here, I initially played it safe, frequenting indie hang-puts like White Heat and Durrr. I don't drink though, so I often found myself feeling a bit left out at these studenty nights. I briefly got into the fashion-obsessed scene around Boombox which was based at Hoxton Bar and Kitchen, but I didn't have the time, the money, or really the inclination to pour myself into a PVC outfit and headdress every time I went dancing!

6. When and where did you last dance?
I last danced at the Amersham Arms in New Cross. It was a night called Bad Seed run by a friend and I had so much fun. I think it's going to be a regular thing there, great if you love garage rock and soul, which I do! 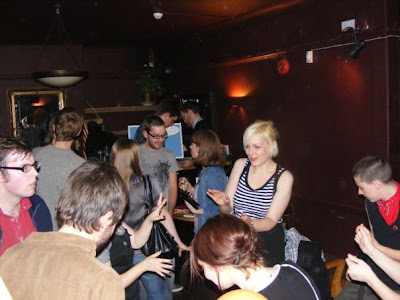 7. You’re on your death bed. What piece of music would make your leap up for one final dance?
Probably 'Y Control' by Yeah Yeah Yeahs again. It's not my favourite song in the world, but it always makes me feel pretty powerful. And I'd like to feel powerful in the face of death. 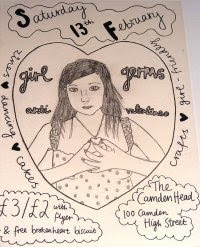 Photos above: from Girl Germs, October 2009.
The next Girl Germs is an Anti-Valentine's night on Saturday 13th February, at the Camden Head, 100 Camden High Street, London. £3 in, 9:00 pm start.
All questionnaires welcome - just answer the same questions in as much or as little detail as you like and send to transpontine@btinternet.com (see previous questionnaires).
Posted by Transpontine at 6:00 am