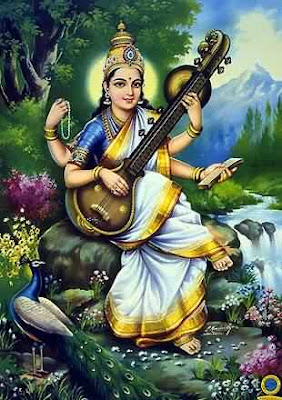 The existence of gods, goddesses, spirits and saints of music and dance in religions and mythologies across the world is testament to the fundamental human impulse to sing, make meaningful sound and move to rhythm. Although priests of various persuasions have often feared and sought to control the power of music and dance, they have never succeeded in banishing it - not even from the stories and legends of their own religions.

So, a short series on some of these musical and dancing deities start with Saraswati, an Indian goddess associated with knowledge, music and the arts. She is usually shown holding a stringed instrument called a Veena. While Saraswati is mostly a figure in Hinduism, she is also acknowledged by Buddhists. Musicians and others often recite a mantra known as the Saraswati Vandana Mantra, which goes: 'May Goddess Saraswati, who is fair like the jasmine-colored moon, and whose pure white garland is like frosty dew drops; who is adorned in radiant white attire, on whose beautiful arm rests the veena, and whose throne is a white lotus; who is surrounded and respected by the Gods, protect me. May you fully remove my lethargy, sluggishness, and ignorance'.
Posted by Transpontine at 9:28 pm

Email ThisBlogThis!Share to TwitterShare to FacebookShare to Pinterest
Labels: Deities of Music and Dance, India, religion/spirituality