And the Rabbit's Name Was...

Chinese New Year on 22 January 2023 marked the start of the Year of the Rabbit, reminding me of the Chinese legend of there being a rabbit on the moon. Actually there seems to have been folklore about a lunar rabbit or hare in various parts of the world, prompted by the shapes to be seen from earth on the moon's surface.

The basics of the Chinese legend were relayed to the crew of Apollo 11 in July 1969 as they prepared for the first human moon landing. Reporting a press story, somebody at NASA mission control in Houston told them:

'Among the large headlines concerning Apollo this morning, is one asking that you watch for a lovely girl with a big rabbit. An ancient legend says a beautiful Chinese girl called Chang-E has been living there for 4,000 years. It seems she was banished to the Moon because she stole the pill of immortality from her husband. You might also look for her companion, a large Chinese rabbit, who is easy to spot since he is always standing on his hind feet in the shade of a cinnamon tree. The name of the rabbit is not reported'. 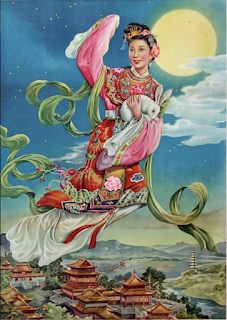 All of which brings me to the A&E Dept's 'The Rabbit's name was...',  a classic slice of 303 drenched London acid techno from 1994  which starts with the Houston NASA sample. The track was written and produced by DDR (Dave Lalouche) and Julian Liberator, and engineered by 'D.A.V.E. the Drummer' (Henry Cullen) at his Punishment Farm studio. Cullen started out as the drummer in Back to the Planet, festival favourites of the early 1990s who started out at the Peckham Dolehouse squat. I believe the original Punishment Farm studio was upstairs in the Harp of Erin pub in Deptford. The

track was released on Stay Up Forever records, founded by the Liberator DJs and responsible for many of the big tracks on the London free party scene in the 1990s. We may have been partying in the gutters but some of us were looking at the moon. 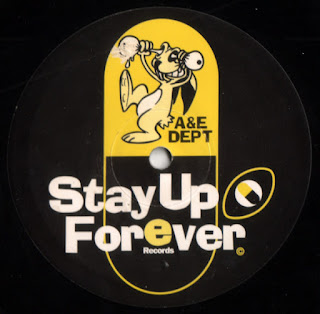