Rene Matić's exhibition 'upon this rock' at the South London Gallery features their very moving film 'Many Rivers' about their father, growing up through family trauma and the care system to be a black skinhead in Peterborough. Jimmy Cliff's song plays over the credits just in case you haven't got a lump in your throat by that point.
Matić takes their 'departure point from dance and music movements such as Northern soul, Ska and 2-Tone, using them as sites to queer and re-imagine the intimacies between West Indian and white working-class culture in Britain'. In particular they reference the 'Skinhead movement, which originally emerged in the mid-1960s as a cultural exchange between Caribbean and white working-class communities' (source: South London Gallery).
A wall of crucifixes feature a model of Rene Matić's father and references the familiar image of the crucified skinhead. 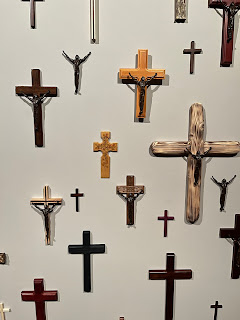 There are parallels with another exhibition at the South London Gallery's other site on the other side of Peckham Road: Simeon Barclay's 'In the name of the father'. Here too a black artist explores themes of exclusion and masculinity with a nod to late 70s/early 80s British working class culture. In this case the references include the 1979 movie 'Scum', set in a brutal Borstal. Barclay's work includes a puppet of Ray Winstone's Carlin character in the film, offset against a puppet of the artist in a 1970s Elton John duck costume. 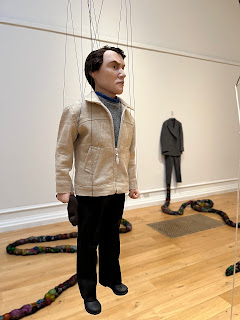 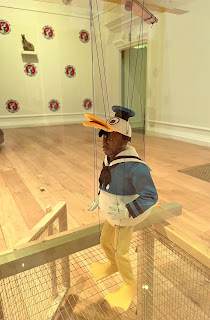 Guard dogs and a fenced off sign for Huddersfield nighclub Johnnys - reportedly hard to get into for young people like Barclay - also feature. 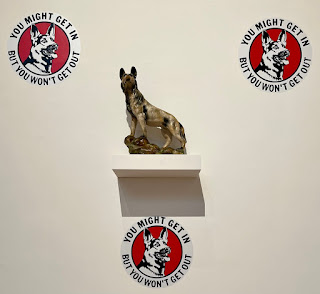 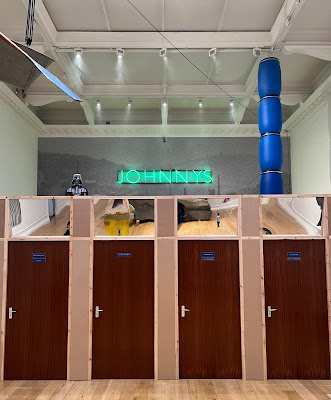