Mark is 38 years old and works as an Advertising Executive in New York, following an odyssey from Tamworth and London via Sheffield.

I think the very earliest was bopping around to Ian Dury and the Blockheads’ ‘Hit Me With Your Rhythm Stick’ with my grandma at a family wedding reception near Walsall, but the one that really stands out is headbanging to AC/DC’s ‘You Shook Me All Night Long’ at a primary school disco in Tamworth, Staffs, where I grew up. I’d seen some older kids doing it at the previous year’s event - my first taste of youth rebellion aged 8! I remembered the names of the bands on the patches sewed onto their sleeveless denim jackets and over the next twelve months become an entry-level rocker, renting albums from the local record library and getting my own cut-off denim with patches and studs. Then eventually it was me and my mates’ turn to headbang at the disco when the token metal record was played. The DJ cut it off before the end as the teachers were concerned about potential brain damage.

What's the most interesting/significant thing that has happened to you while dancing?

Building a deeper relationship with music. I’ve devoted much of my life to music in all its forms and through dancing I enjoy exploring its qualities more deeply, amongst the thrills and spills. I remember dancing in Manchester in 1996 in the Village to ‘The Love I Lost’ by Harold Melvin and the Blue Notes and suddenly realizing that the dance music I enjoyed most had a particular combination of uplifting-ness and melancholy which then set the course ahead for many years.

You. Dancing. The Best of times...

New York 2007-2010. People say dancing in New York’s not what it was. Sure, over-zealous regulation has harmed the vibrancy and scale of the club scene but this has been replaced by an amazing DIY attitude for the past decade or so. This manifests in all-night semi-legal dance parties in lofts and warehouses mainly in Brooklyn often featuring an eclectic mix of music, DJs, performance and participation. There’s a real sense of excitement for me around something genuinely underground, unpredictable, community based and musically eclectic which has totally revitalized my love of dancing. It’s as if dance music has resumed its role in the city as outsiders’ music, which is how I’ve always most enjoyed it.

You. Dancing. The Worst of times...

When I first moved to London in the late 90s I found it hard to find a scene that satisfied me. DnB was too hard and fast, House had got too cheesy, Big Beat was too beery and everything was too segmented and focused on one style of music. Maybe I just wasn’t looking hard enough though at the time.

Can you give a quick tour of the different dancing scenes/times/places you've frequented?

I started dancing regularly in 1987 at an under 18s discos in Tamworth at a club called the Embassy. It wasn’t really my scene though and things didn’t really take off until I discovered ‘indie’ music via John Peel and then started to make regular trips to Birmingham to indie disco nights and 60s psychedelic nights like the Sensateria at the Institute, as well as the odd hardcore rave. University in Sheffield in 1992 meant a headlong rush into house, techno, garage and funk with the poly-sexual scene around Vague [Leeds], Flesh [Manchester] and Sheffield’s Trash providing a little spice around the slightly-cheesy uniformity of the post-acid house scene up north at the time. 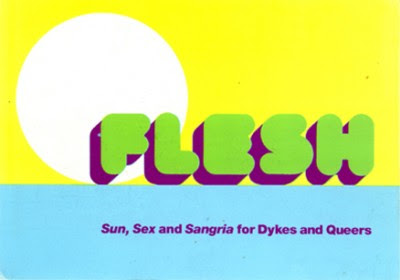 A move to London in the late 90s meant a hotch-potch of east-London fare – reggae, DnB, ragga, hip hop, a bit of house and the electroclash scene around Nag Nag Nag. Carnival weekend was always the highlight of the year, and I had a brief involvement with a north London pirate station. But gradually dancing died away. In 2005 the move to New York reignited it all again.

You're on your death bed. What piece of music would make you leap up for one final dance?

‘I Want Your Love’ by Chic. The perfect combination of yearning, hope and melancholy that characterizes much of my favorite music to dance to.

All questionnaires welcome, just answer the same questions - or even make up a few of your own - and send to transpontine@btinternet.com (see previous questionnaires).
Posted by Transpontine at 3/25/2012 08:52:00 am